Boris Buden: What Does It Mean to Be “In Crisis”? 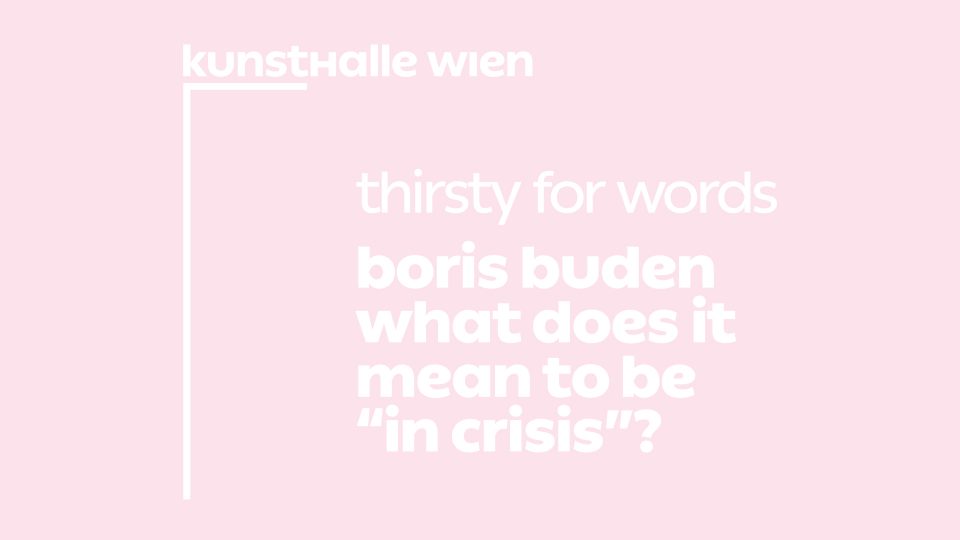 The phrase “corona-crisis” is these days on everyone’s lips, and understandably so. We are faced with a deadly disease that, only a few months ago, was completely unknown and has in the meantime dramatically changed the lives of hundreds of millions of people across the world. They, no doubt, feel the crisis firsthand, but do they—do we?—really know what it means to be “in crisis”?

So far, the current public discourse around COVID-19 and its devastating effects has used the notion of “crisis” in almost exclusively descriptive terms, as if it were self-explanatory: a break from normality or, more abstractly, a temporary disruption of an otherwise stable preexisting condition. This overly simplified understanding of crisis is at the core of mainstream public propaganda about the struggle with the disease and its strategic goal, which could be summed up in a phrase that is heard everywhere at the moment: “return to normality.” This “return” is not only about what masses around the world, struck by the crisis, spontaneously want by themselves; rather, it is about what their political elites are promising them. Such a political promise, however, goes far beyond “getting things back on track.” It is much more a performative act of political mobilization, a call for action, which, as it is intrinsic to a political action, aims at shaping the future—a future that, curiously enough, looks like a status quo ante. At this juncture, at least, the notion of crisis becomes ideologically suspicious.

At somewhat higher levels of reflexion, the corona-crisis is regularly explained as a “revenge of nature”: what at first appears to be a sudden and dramatic salto of the virus from animals to humans—the “spillover event,” as scientists call it—is in fact only the final act of a long evolution-like process of transformation initiated and advanced by human agency and its ill treatment of nature. After having been misused for too long as a mere resource for a headless progression of humankind, subjected to endless extraction and exploitation that has led to what we today call climate change, nature strikes back. It is now exposing the intruder to the full scale of its contingency, which is threatening the very survival of the human race; the spilling over of a virus into the human species stands, in fact, for nature spilling out of control.

Bruno Latour is among the most prominent thinkers who have clearly put the global pandemic into the broader context of climate change. For him, the experience of the current health crisis is a sort of prelude—or, as he calls it, a “dress rehearsal”—for the major challenge ahead: the ecological crisis.[1] While the “war against the virus,” which an instructing and protecting nation-state fights with all the (biopolitical) means available to it, can have some success against this particular enemy, we are, Latour argues, totally unprepared for the coming “ecological mutation.” To cope with a crisis of this scale, an entire reorganization of living conditions will be required. The nineteenth-century model of a territorial nation-state, with its political and social infrastructure designed to uphold a particular (nation-)society consisting exclusively of, as Latour puts it, “humans among themselves,” is incapable of dealing with a pathogen that, unlike the coronavirus—which is only temporarily disrupting an alleged normality—“has changed the living conditions of all the inhabitants of the planet.” For the French philosopher, there is no doubt as to what this pathogen, which is already causing the next crisis, is: humanity itself.

Latour’s diagnosis of both the current and the coming crisis sounds realistic. His distrust in the institution of the nation-state, which, as he believes, is helpless in the face of the coming ecological crisis, seems not to need any additional argumentation. Even his most politically explicit statement—the warning against an “archaic” return to the old regime of national borders, which has been reactivated to protect us from the virus’s spread—can count on our full support. But is that all? Can a radical change in our concept of nature and of the world of objects, and their cognitive admission into the very idea of what the human is, what society is, and what our historical temporality is—as Latour suggests—brace us for the impact of the coming climate crisis, which, as is becoming increasingly clear to us, we might not survive? In short: Can a radical turn in our understanding of nature really help us to escape its revenge?

What is today, in the context of the corona-crisis, called the “revenge of nature” has more than one dimension. It implies not only a reaction of nature to the human intrusion, but also its opposite of a sort: an intrusion of nature into human affairs—perpetrated, with an ideological purpose, by the humans themselves. We got a glimpse of it in the guise of social Darwinism, which was recently rediscovered by one part of the ruling political elites and spontaneously deployed in their attempts to confront the pandemic. Their policies seemed to follow the invisible hand of nature: letting the weak die and the strong recover as quickly as possible, so as to “get the economy back on track.” This, however, was not merely an accidental normative derailment. An overall ideological naturalization of the whole sphere of human affairs—a process whose devastating effects on our ability to cope today with the climate crisis cannot be overestimated—has been on track for quite a long time, at least ever since the so-called neoliberal turn. The entire realm of social relations has been polluted by the logic of natural processes up to the point of its total paralysis, which is why blind fatalism is leading us into the climate catastrophe. However, a naturalization of social relations necessarily implies their dehistoricization. What horrifies us as an apparently unstoppable extinction of a natural species is, in fact, significantly conditioned and facilitated by a no less fatal extinction of history. Celebrated, a few decades ago, almost unanimously as the ultimate victory of liberal democracy, the “end of history” has left us, in the meantime, locked up in a linear temporal continuum that resembles the natural flow of time, the tempo and direction of which are out of human control. Any orientation within the historical temporality that would rely on a reflected historical experience now seems impossible. A distant past may be easily mistaken for the present reality, or even promised as a desirable future; a society of the twenty-first century dangerously resembles those feudal ones we like to believe we have forgotten. Moreover, without a unity of historical time, the statistical data that count down the temporal distance to the climate catastrophe, to the point of no return, which will be reached soon, don’t translate into the will to change. Such a will does not exist in nature. Finally, a similar transformation has also affected political power relations. They too have acquired the character of natural hierarchies: the rich and the poor caught in an eternal stalemate, with no history to reignite the class struggle between them. In the costumes of a tragic global fable, humanity has already staged the dress rehearsal for the major political crisis that lies ahead. Before being burned by the sun, drowning in the rising seas, or dying of thirst, we will face each other on the political battlefields—armed to teeth but without the normative ideal of eternal peace on our minds.

There is, indeed, nothing natural in a crisis. Rather, it is thoroughly a historical phenomenon. According to Reinhart Koselleck, one of the twentieth century’s most prominent philosophers of history, the concept of “crisis” was an invention of the eighteenth century, specifically devised by the thinkers of the Enlightenment.[2] They, however, understood it only in its one, moral dimension. The political meaning of crisis remained hidden to them. For the crisis they cognitively grasped was, in fact, a political crisis—the crisis of an imminent political decision. This decision, as we know today, was made by the French Revolution, which provided the final answer to the question: What does it mean for the world of feudal absolutism to be in crisis? Everything speaks to the fact that we today have found ourselves in a similar situation—confronted with the question: What does it mean for the world of neoliberal capitalism and liberal democracy to be in crisis? Our answer, it seems, cannot be much different from the one given by the sans-culottes on the streets of Paris more than two hundred years ago.

Boris Buden is a writer, cultural theorist and translator. Born in former Yugoslavia he studied philosophy in Zagreb and cultural theory at Humboldt University in Berlin. Since the beginning of the 1980s Buden publishes essays and books on critical and cultural theory, psychoanalysis, politics and contemporary art in Croatian, German and English. He teaches at universities in Europe and lectures worldwide. Buden is permanent fellow at the European Institute of Progressive Cultural Policies, Vienna (eipcp). Buden currently lives in Berlin.