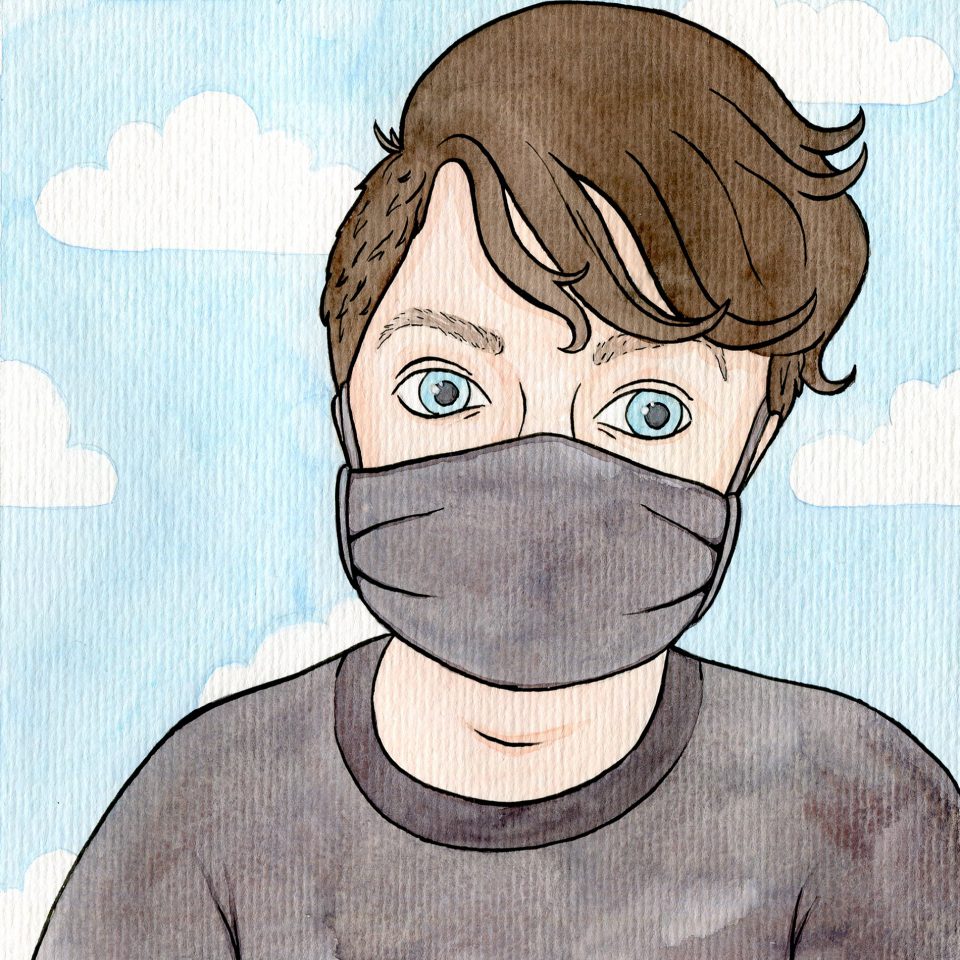 Crip trans activist Em Gruber regularly published tweets during the corona pandemic. Sometimes furious, sometimes funny, sometimes desperate, but always poetic and critical in the same breath, the tweets provide razor-sharp commentary about crisis management during the pandemic, about social eugenics and biopolitics – and more generally, about the apathy of politicians toward people with disabilities or chronic illnesses, and also toward trans people. These reflections are intermingled with very personal experiences and transformations.

Em Gruber presented the Twitter posts on July 24, 2020 at Central Garden on the occasion of the opening of Eva Egermann’s work Hold Me Tight! (with texts by Ianina Ilitcheva), a project in the framework of KISS.

Hello, my name is Em. I’m dis-abled, I’m crazy, I’m queer, I’m trans.
And my voice is breaking – hope you can handle that.

Many people cannot be here today – the increased risk of corona is just one of the reasons. The lockdown restrictions were hard for many. For example, queer teens and children had to remain in unsupportive or hostile environments. Important medical procedures were postponed indefinitely.

I also read so often about how little my life and the lives of those who are especially endangered are worth. How easy it would be to do without us and how much more important profit is. Clearly, eugenics and capitalism go hand in hand.

There were also some good things: many people now have an insight into how it feels when you are not able to go to bars and events or shopping on your own. That’s how it is all the time for many dis-abled and chronically sick and poor people – before corona and after. Perhaps we can maintain all of the barrier-free measures – measures that have always been demanded but were only feasible once everyone was afflicted.

Loosening the restrictions means that now many people are once again alone in their isolation. Let’s keep the solidarity and keep an eye on one another!

People suffering from mental illnesses are often demonized – yet we are more frequently exposed to violence than the mentally healthy. Especially Black people and people of color with mental illnesses and disabilities are affected by police violence and medical racism.

Left-wing circles also make fun of apparent and actual mental deficits, illnesses, and the physical features of racists and co. They do so to distance themselves from them – but don’t criticize the discriminating statements and acts, rather just push the sick and disabled further to the sidelines.

Mental illnesses are not a personal problem – they often emerge from the pressure to perform and compete in capitalism and from the constant exclusion and discrimination. Moreover, it can’t be that therapy must be paid by oneself.

This health system traumatizes over and over again.

Activists faced with multiple discrimination burn out one after the other because they not only have to deal with all of the majority society crap, but also tilt against windmills each day in their own communities.

I want that we all can not just survive, but live!
A good self-determined life for all is not asking too much.
We must destroy capitalism.
We must fulfill needs instead of criminalizing and controlling humans in need.
We must open the borders.
As white queer people, we must fight together with black queer trans people.
As Marsha P. Johnson said: “No pride for some of us without liberation for all of us.”
Let’s build barricades instead of barriers.

Em Gruber is 27 years old and currently undergoing a second – this time for real – puberty. The non-binary person lives in Vienna and is engaged as an activist and professional in dismantling barriers. As of late, Em Gruber also dares to make art. Under the name @panikwolke, Em writes on Twitter primarily about being crip, mad, and queer.

February 18
since I don’t bleed anymore, I always have nightmares about it – great
LOL I’m really bleeding, bloody hell!

February 19
hi I have to tell you something good! someone switched with me, so my appointment in the trans clinic is already ON MONDAY!!!

February 24
no pushing, please, I have 3 expensive reports about my transsexuality in my bag
A P P R O V E D
euphoria kick, cause for once someone at the health insurance office called me up by “for last name”
2 pharmacies don’t have it in stock, GIVE ME THE TTTTT
five o’clock tea

February 27
me, 2 days on testogel: me so strong, me so confident, me ruling world soon

March 3
last week I had so much energy. but this week zero. typing is so exhausting, phew

March 4
psychotherapy in a dependent relationship is such bullshit

March 9
eugenicists come out of the woodwork all over, it’s just old and chronically ill people anyway, right?

March 10
my panic about birthday planning has been resolved

March 11
start of week 3: I think my face is already getting a bit more edgier
oh noooo, psychotherapy cancelled due to corona
ok, slowly I’m really getting in a panic, perhaps should do something else…*read articles about people in the usa who pay extreme sums for corona tests*
it’s crazy, it’s my birthday tomorrow and I’m just happy and I see a future for myself, even though I’m in a panic cause a lot of things are pretty bad at the moment and going to get worse.

March 13
I can’t throw a birthday bash, instead I have a _viral_ tweet (sorry haha)
OPEN. THE. FUCKING. BORDERS.

March 14
measures from health insurance, they can just as well stay like that after the pandemic…..

March 18
me at the beginning of series binge watching: oh shit, keep your distance, oh a party – how weird, no, no kissing! me after several episodes: oh shit in real life is corona… :o
corona – the aprés ski virus

March 19
math is so weird. said yesterday: till tomorrow, 2 more people have to die from corona in AT. and then it’s really like that and it is doubling every 3 days and someone keep me from calculating please
is ischgl really called the ibiza of the alps? that’s so funny

March 20
6 pm: people yodeling from their windows in the tenth district??????

March 21
I am from austrofascism

March 23
today I’ll try getting my meds with as little as contact as possible, wish me luck
shopping list:
gin
tonic
cucumber

March 25
there’s a case in the home where my opa lives
social darwinism and eugenics everywhere. it’s really a lot of fun to learn how many people would rather see me and other disabled and chronically ill people dead to rescue their beloved capitalism.
pride is cancelled.
summer night concert postponed to autumn. why not the pride too?

March 26
it is really slowing down. no longer 3 but 4.3 days until the corona cases double.

March 27
my opa is NEGATIVE! <3
but solitary isolation is still such a drag when you can’t really do much by yourself anymore
4 calls + 1 email later I can finally pick up all my meds in the pharmacy this evening, pheeeew
my family doc goes like: “but that’s testosterone, what do you need it for then? skin?” yeah I would really love loads of pimples in my face :D

March 29
tweets for people whose parents STILL act irresponsibly
look, there’s an edge on my cheek!

March 30
have to stick notes with “back straight” everywhere
regards, working cross-legged bent over my laptop
bought a load of snacks today, that’s nice

March 31
why does everyone know how to sew all of a sudden?
and why do you all have sewing machines?

April 9
sorry I was nagging about your sewing. I urgently need a mask, actually
testosterone week 6
half of my seat pad is gone

April 15
when does the vaccination come???
I want a live ticker!
getting ads for asparagus on instagram, what’s that for a timeline, actually?

April 20
take emergency pills only when I really feel like shit and have already suffered for a long time, otherwise I haven’t earned it … why am I like this?
can’t the world work together on a vaccine… aarrgh

April 26
sleeping pill isn’t working today
May 4
I was on the countryside and again did not manage to out myself and cried afterwards.
my mum asked what’s wrong with my voice cause I sound like Edith Piaf hahaha
nooooo rien de rien, noo je ne regrette rien

May 6
why are video conferences so exhausting?
everyone is writing books, why can’t I write a book, I wanted to write one already as a child before my psyche got all fucked up
how many followers get you a book contract?
don’t even make it to 1 article – take this tweet instead

May 19
trump’s hydroxychloroquine saying will again have chronically ill people not getting their drugs – thanks a lot for that!
(it doesn’t just help with malaria, but mainly used for rheumatoid arthritis and lupus)

May 20
bought a pack of jolly ice cream sticks, that made my day

May 26
just had a really good therapy session
but next week I have to… l-leave the house again…
I’m not ready yet
3 months T: the voice it breaks breaks breaks

May 27
mystic place AKH hospital – now all the more mystical!
didn’t pick up a new trauma during checkup, I am positively shocked!!!

June 1
pride month 2020: first smear 1 dag of highlighter on face and then cover it with mask and sun glasses

June 6
people, I came out at my family’s and one hour later arose a gorgeous rainbow!

June 10
why did I read the essay by j terf rowling?
if I had listened to music in my youth I wouldn’t be trans now OK INTERESTING
why does negative feedback always count at least twice as much as support?
June 11
someone please drag me out of the negative spiral

June 15
voice break already sucks a lot, how long does this take?
want to warble away to songs pls

June 17
there is a charge against kickl and nehammer because of the 3rd sex entry
DISMANTLE Lueger monument!

June 19
documenting the transition timeline of my plants better than mine.
yes here comes a beard, but did you see how many leaves my inchplant has?

June 25
I know so many lovely people omg!
and I have succeeded in doing something difficult omg!

July 8
outside in croptop and shorts, today nobody can harm me

July 22
remember when we had to run to all the doctors for each and every crap?
sent with ice gel on the legs after two appointments

July 23
was misgendered 5x today, I return to isolation.