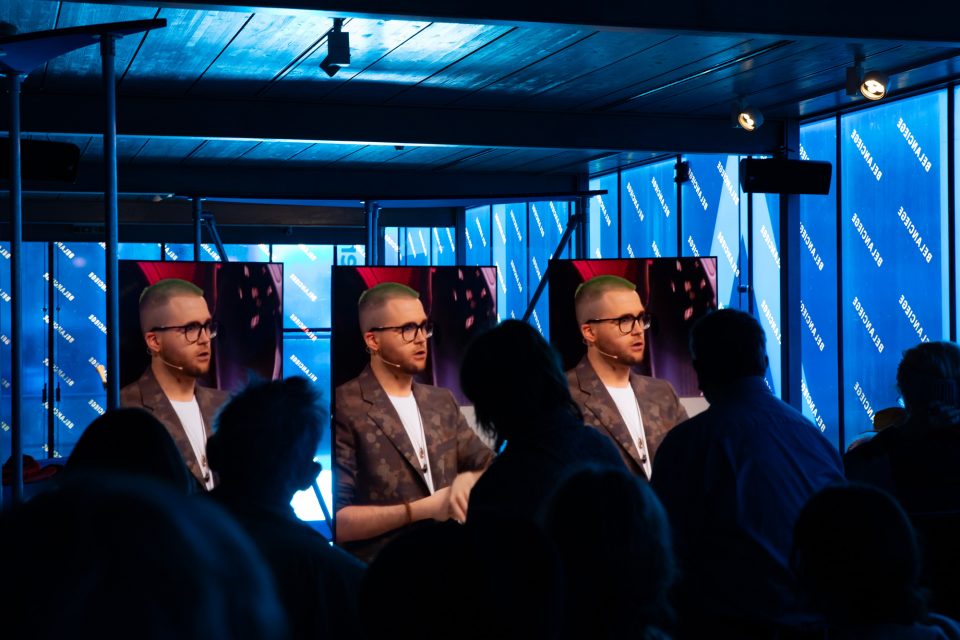 Giorgi Gago Gagoshidze’s and Miloš Trakilović’s joint work with Hito Steyerl Mission Accomplished: BELANCIEGE is part of the exhibition … of bread, wine, cars, security and peace. After a joint viewing of the film at Kunsthalle Wien Karlsplatz the two artists will talk about the project, followed by a Q&A. (In English)

The point of departure for their three-channel video installation is the fall of the Berlin Wall in 1989 and how this historical event paved the way for commodification and privatization. The artists turn to the field of fashion, using the luxury brand Balenciaga as an example to reflect on political and cultural changes in the period of the last thirty years.

Miloš Trakilović, b. 1989 in Tuzla (Bosnia and Herzegovina), lives and works in Berlin and Rotterdam. He studied Fine Art at Willem de Kooning Academy in Rotterdam (2009–2012) and Experimental Film and Video with Hito Steyerl at the University of the Arts in Berlin (2012–2016). His artistic practice revolves around the politics of perception and is often influenced by his biography. Using experiences of war as a basis, he explores questions of dissolution, fragmentation, and memory.

Giorgi Gago Gagoshidze, b. 1983 in Kutaissi (Georgia), lives and works in Berlin. He studied Fine Art at the State Academy of Arts in Tbilisi (2001–2007) and the Royal Academy of Fine Arts in The Hague (2008–2010), as well as Experimental Film and Video with Hito Steyerl at the University of the Arts in Berlin (2012–2016). In his works, Gagoshidze considers issues such as the moving image, the political background of its production and distribution, and its socio-political significance.

We look forward to welcoming you again to our guided tours! Since groups are currently limited, we kindly ask you to register in advance via besucherservice@kunsthallewien.at or directly at the cash desk at Kunsthalle Wien Museumsquartier.