Joshua Decter Art Is a Problem 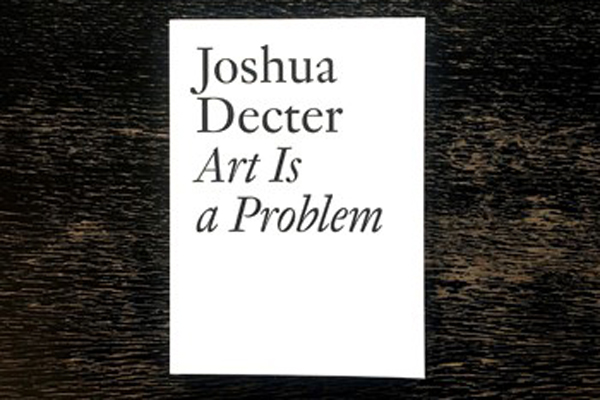 New York-based writer, curator, art historian, and theorist Joshua Decter will discuss his new book, Art Is a Problem: Selected Criticism, Essays, Interviews and Curatorial Projects (1986-2012). In chapters such as Everything is Social, Convoluted Cities or On the Curatorial Road the publication summarizes selected reviews, essays, interviews and curatorial texts spanning 1986 to 2012, where Decter examines art’s paradoxical condition: art problematizes, and is intrinsically a problem. From this standpoint, he analyzes art’s definitions, functions, ethical entanglements, societal aspirations, and cultural contradictions.

Joshua Decter has contributed to Artforum, Afterall and Texte zur Kunst, has curated exhibitions such as Transmute at The Museum of Contemporary Art in Chicago in 1999 and Dark Places at The Santa Monica Museum of Art in 2006, has participated in many international symposia and has taught among others at the University of Southern California’s Roski School of Fine Arts in Los Angeles, at the Center for Curatorial Studies at Bard College and at the School of Visual Arts in New York.

In addition to Art is a Problem, Decter is the co-author of the forthcoming book Exhibition as Social Intervention: ‘Culture in Action’ 1993, which is published in 2014 by Afterall Books as volume 5 of the Exhibition Histories series.