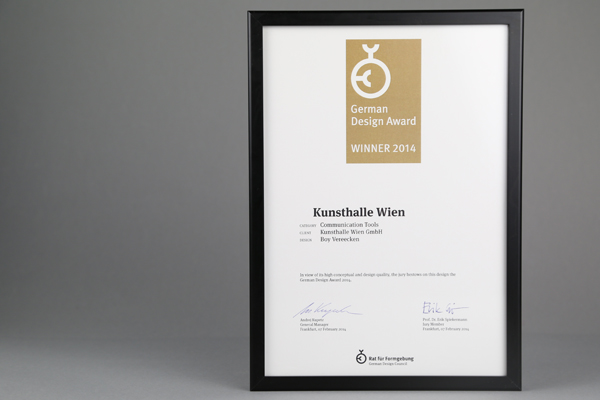 In the category “Communication Tools”, Kunsthalle Wien impressed the jury with its new visual appearance, centring around an eagle that is constantly presented in different ways.

The new look of Kunsthalle Wien has been developed by the Belgian graphic designer and artist Boy Vereecken. Vereecken’s design takes the idea of the eagle from Vienna’s coat of arms but doesn’t define a specific appearance for the eagle. Instead, the concept combines a graphic and semantic source with an ironic, playful realization. This approach does justice to an institution that is constantly questioning itself, experimenting and changing. With each exhibition project, the eagle takes on a new guise and in this way visually reflects the mutability of Kunsthalle Wien itself.

Nicolaus Schafhausen, Director of Kunsthalle Wien, is delighted with the award. “We wanted to initiate something radically new, an idea that really contrasts with the images and visual styles of other art institutions, both in Vienna and further afield. The current trend is toward highly minimalistic designs dominated by rather austere typography. In principle I really like this graphic approach, but it was clear that Kunsthalle Wien needs to present itself with its own visual language and should be able to communicate its rich programme in a controversial way, too. I’m positively surprised by the enthusiasm with which our international public has greeted the eagle, and how many reactions this new visual image has generated in the social media.”

Michael Wuerges, Head of Strategy and Marketing at Kunsthalle Wien, adds: “With our new corporate design we not only constantly question Kunsthalle Wien as an institution, but also the whole brand system. We don’t regard the brand Kunsthalle Wien as an item of institutional property, but as a social code and amplifier for a broader social discourse. We don’t want to communicate a rigid standard – after all, we also derive our credibility from the way we constantly question cultural and social trends instead of simply following them.”

Boy Vereecken (*1982) teaches graphic design at Sint Lucas College of Art in Antwerp. He has also taught at Marmara Üniversitesi Istanbul and at Università Iuav di Venezia, at the Sandberg Institute in Amsterdam and at the Otis College of Art and Design in Los Angeles.