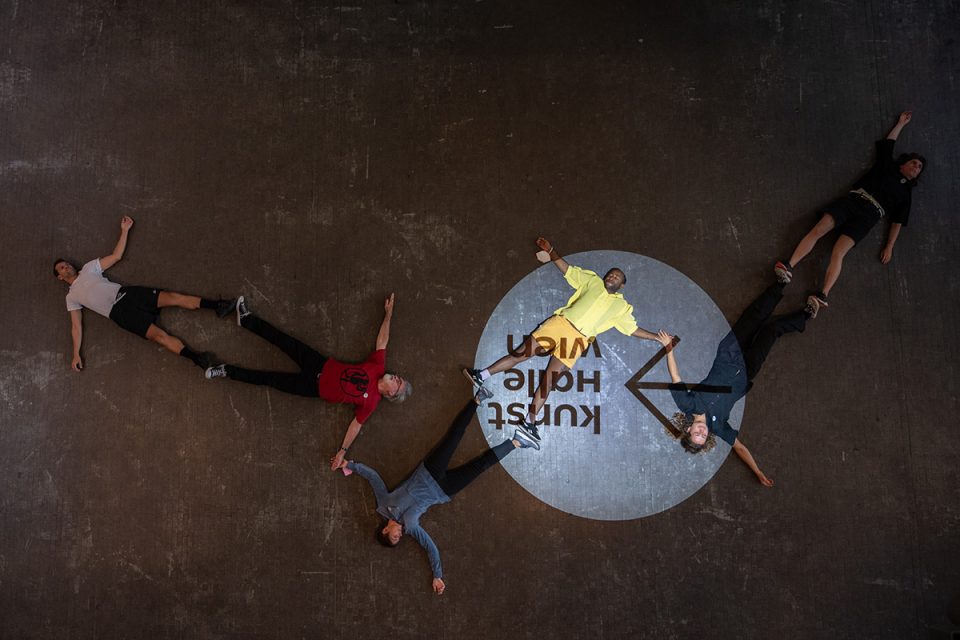 A co-production by Kunsthalle Wien and Tanzquartier Wien.

To attend the performance, an admission ticket to Kunsthalle Wien is required.

Permanent Collection is an ongoing live action, constructed around the notion of a permanent collection. At Kunsthalle Wien, Romanian artist Manuel Pelmuş explores the possibility of a collection based on performative and collectively elaborated gestures and actions. The work is enacted by a group of performers who transform and re-mediate art-historical references, cultural artifacts, contexts, events, texts, and gestures using only the body as a medium.

Manuel Pelmuş uses this kind of enactment as a performative strategy which delves into the context of specific places and institutions, moving freely between strict classification categories and notions of ownership, suggesting the possibility of an embodied, commonly shared heritage. At Kunsthalle Wien, Permanent Collection is performed continuously for four hours each day, simultaneously – literally moving together – with a dancer in Timișoara, Romania, at the Museum of Public Transportation. Although there is no visible link between the two spaces, the knowledge of their shared movements connects audiences across the two cities thus opening a territory of participation. For this iteration Permanent Collection proposes many instances of the body as a site of resilience and agency. It embodies the political idea that when one acts alone, the act is always animated by the production of others, even if they do not share the same time or place.

The ongoing action is installed in the ground floor gallery of Kunsthalle Wien and in the semi-public hallways and in-between spaces, shared by several institutions within Museumsquartier Wien and leading to the entrance of Kunsthalle Wien. The visitors can spend whatever amount of time they like with the work, being able to leave and to come back at any moment. There is no beginning and no end.

Manuel Pelmuş is a Romanian artist with a background in choreography. He works in different contexts such as exhibition, theater and public spaces. In 2013 he represented Romania at the 55th Venice Biennale together with Alexandra Pirici. His works have been shown in museums and biennials worldwide, among others: Kyiv Biennale; Tate Modern, London; Van Abbemuseum, Eindhoven; Para Site Hong Kong; OFF-Biennale Budapest; Centre Pompidou, Paris; Museum Ludwig, Cologne; Hebbel am Ufer, Berlin; SALT, Istanbul; BOZAR, Brussels; Gothenburg Biennale etc. In 2019, he co-curated together with Pierre Bal-Blanc the exhibition Collective Exhibition for a Single Body – The Private Score – Vienna 2019, a co-production of Kontakt Sammlung and Tanzquartier Wien. In 2012, Pelmuş was awarded the Berlin Art Prize for Performing Arts, and in 2014 he received the Outstanding Achievement Award from the National Dance Center in Bucharest.

Manuel Pelmuş is currently a research associate at the Oslo University of the Arts (KHIO). He lives and works in Oslo and Bucharest.