My View with Jana Dolecki 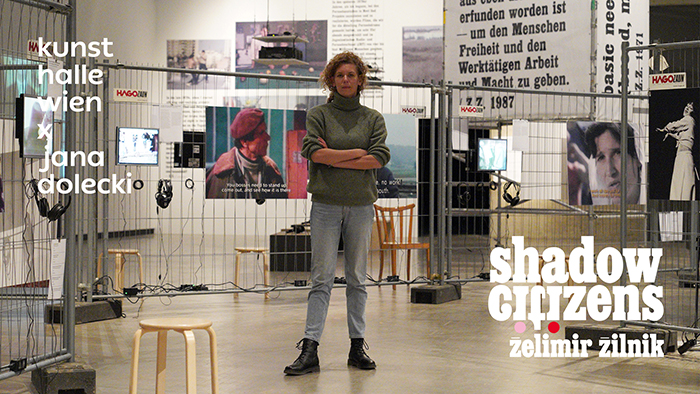 What We Hear in the Shadows

Jana Dolecki’s guided tour will focus on the musical aspect of selected works by Želimir Žilnik presented in the current exhibition Shadow Citizens.

As can be seen when analyzing or, more precisely, “listening” to his films, Žilnik very often uses music as constructive dramaturgical material. Drawing on various genres (traditional music, local and international songs of anti-fascist rebellion, popular music, etc.), the filmmaker gives music a central role in telling stories, explaining the socio-political context, or conveying the emotional background of the characters depicted in his films.

The tour aims at detecting and investigating the most interesting musical aspects of his works, pointing out the general importance of musical scores as used on-screen.

Jana Dolecki is a theatre scholar, cultural producer, and PhD candidate at the Institute for Theater, Film, and Media in Vienna, on the topic of theater in the context of the Yugoslav Wars of the 1990s. She is the conductor of the Viennese choir HOR 29. Novembar, a singing self-organized collective dedicated to anti-fascistic, workers’, and migratory musical heritage which was part of Želimir Žilnik´s latest film, The Most Beautiful Country in the World and the opening of the exhibition … of bread, wine, cars, security and peace at Kunsthalle Wien.

The tour will be held in English.

My View is a series of tours in which experts, amateurs, and interesting people are invited to present their personal view of the exhibition.