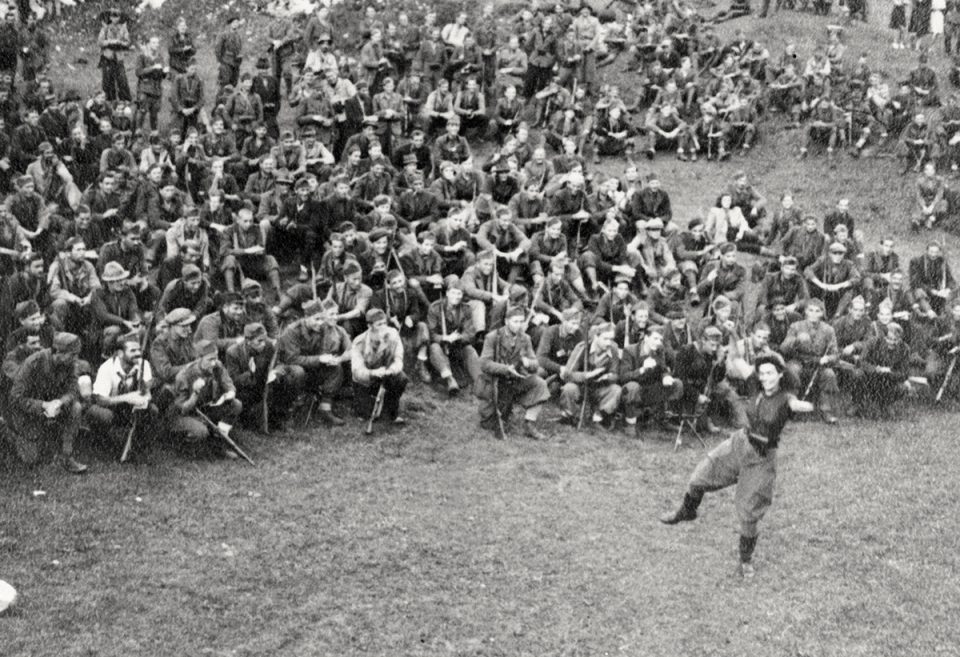 Organized by Kunsthalle Wien in cooperation with Volkstheater Wien

The number of participants is limited, we kindly ask you to register in advance at rsvp@kunsthallewien.at.

The entire seminar will be held in English. Some of the contributors will be participating online.

This seminar revisits various inspiring experiences—political, artistic, and pedagogical—of partisan struggles of the long twentieth century. Expanding the traditional scope of research on partisan movements to look beyond the antifascist and national liberation struggles of the Second World War, we propose an understanding of these movements as configurative models of radical cultural and political production imbued with an anticolonial and internationalist spirit that operated throughout the long twentieth century and that can be traced to the struggles of today.

Alongside a historical analysis, the Partisan Cultures seminar aims to offer a critical resignification and use of the concepts of the “partisan” and “partisanship”, both in the realm of contemporary art as well as in political practice, in light of rising right-wing authoritarianism around the globe.

This session expands the definition of “partisan struggles” from what historically has been located in the time of the Second World War—referring specifically to antifascist and national liberation struggles—to a broader conception of political and cultural partisanship. Rather than a bipolar history centered around the trope of the Cold War, we propose to reread the (second part of the) twentieth century through ruptures, evoking philosopher Walter Benjamin’s proposal to blow up the continuum of history and its grand personae. Such a partisan hypothesis gathers together an array of struggles that were first defined negatively, as fights against fascism, colonialism, and imperialism (and at times also capitalism), and adds to this understanding several important traits: namely, their creative, transformative, and productive dimensions.

The Global Left Does Not Exist

The world is fractured by an international division of labor and great divides along lines of wealth and technology, driven and magnified by the history of colonialism. Given the immense gaps between different parts of the world, the growth of internationalism has been deeply troubled. Is a “global left” even possible in these conditions? That is the provocation for this lecture.

This panel looks into the hybrid nature of partisanship and analyzes the—still ongoing—transformation of the figure of the freedom fighter, who overturns existing ways of doing and thinking. The freedom fighter’s audacity, preparedness, and enthusiasm are in fact necessary for decisive and radical action. The panelists will focus on radical pedagogies and potent methodologies by looking at emancipatory moments from the past, as well as looking at the search for new languages and modes of storytelling as a way to resist the current political melancholia and turn it into novel revolutionary theories and practices.

Culture as a Weapon of Liberation and Solidarity

This session aims to redefine the meaning of “weapon” within partisan struggles, reintegrating the radical sense imbedded in the cultural practices that those movements generated. Looking at visual and performative productions, we want to study and evaluate how partisan cultures transformed traditional ways of understanding art, completely redefining concepts that for a long time had been considered dichotomies—such as propaganda/experimental, amateur/professional, solidarity/violence—and adapting them to contemporary challenges. Building on different case studies from around the world, we will assess the contribution of cultural practices to the configuration of emancipated social, cultural, and political structures, as well as in relation to new forms of social cohesion, collective collaboration, and radical utopian imagination.

Film screening and discussion with the director

Throughout her childhood, Andrina Mračnikar picked up the story of Andri, her grandmother’s brother, like pieces of a great incomplete puzzle of myths. Andri—a deserter, a partisan, and wanted by the Gestapo—was executed in November 1944, and in this story he plays the role of the hero. The partisan songs of the Carinthian Slovenes provide the soundtrack.