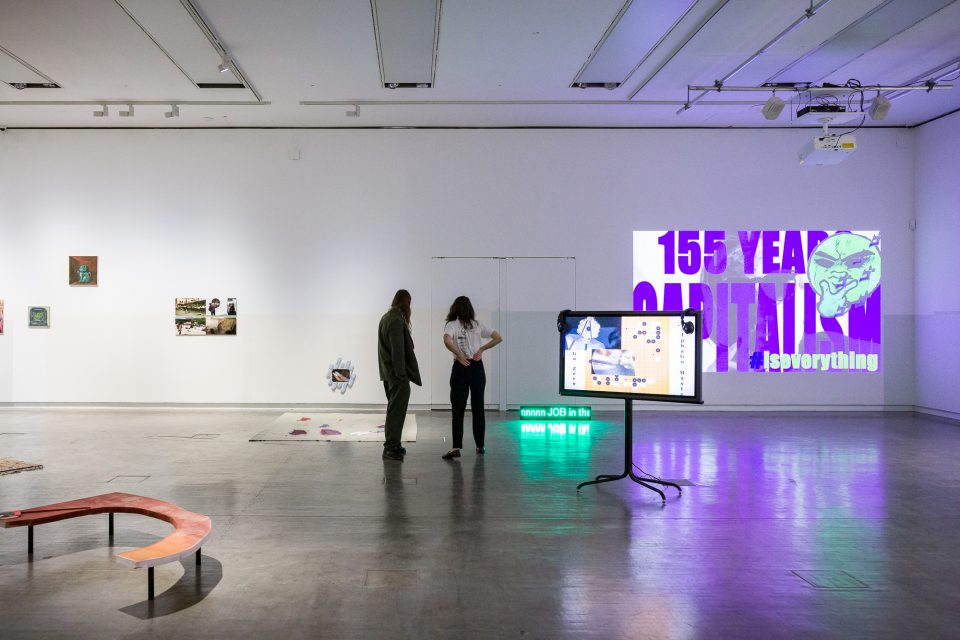 The discussion will be held in English.

The admission is free of charge.

What does it take to be a young artist today? Against the background of austerity, decreasing public support, increasing privatisation, and decreasing political or unionist representation, to be a young artist today (with young we don’t refer to any age but to the beginning of a career path), is, more often than not, to be in a state of precariousness, to live with an insecure present and an unforeseeable future due to unstable and exploitative labour relations.

And indeed, to be a young artist today implies a double alienation. In the absence of familial support, it means first of all to pursue a bread job, often low-waged, often not connected to the art world, trying to keep it as less time-consuming as possible in order to have time to work artistically. At the same time it means to look for all kinds of “opportunities” in the art world, be they participations to exhibitions, to discussions, applications to open calls, to prizes, to scholarships and other funding possibilities, disregarding the working conditions they impose such as fluid working hours, high levels of mobility, hyper-communication and flexibility, bad wages (or non-wages) and lack of social benefits.

When Judith Butler talks about precarity as a material or immaterial insecurity and an increased exposure to violence, disease and death, she invokes a gender queer and racialized perspective to underscores intersectional discrimination. The experiences of precarity, in the cultural field like everywhere else, are of course differential according to the race, the class, the gender, and the sexual orientation of the people concerned – the intersectional discrimination interacts with specific labour characteristics of the art system.

The panel discussion will be structured in three moments: First, artists Anna Spanlang and Chin Tsao, both holders of the Kunsthalle Wien Prize 2021 will speak about their own experiences, focusing on the financial struggles and/or discriminations they had to face, as well as on the strategies they found to cope with and improve a precarious living situation.

Afterwards, scholar and researcher Anke Schad-Spindler will contextualize these reports with statistical data and analyze the financial situation young artists’ face in Austria and Europe over the last ten years, especially during the Covid-19 pandemic. Sheri Avraham, artist and member of the board of IG Bildende Kunst Wien, and Johan Frederik Hartle, Rector of the Academy of Fine Arts Vienna, will then provide a picture of the existing public support structures (on the level of state and city cultural policy as well as on academic level) before discussing what should be implemented to improve the financial and social situation of all young artists without discrimination and on a long run: from the realization of strict fair pay policies up to the implementation of structural support, as well as the political reassertion of the role of artistic production towards cultural value within society at large.

The panel should provide a horizon where young artists would be freed from the terrible decision they are facing: either to push on despite this precarity and “invest“ in themselves through contiuous self-exploitation. Or leave it alone completely.

Sheri Avraham is an artist, curator and theatre-maker. She currently works as curator at D/Arts, a project office for diversity and urban dialogue. She is a board member of the Interessengemeinschaft Bildende Künste and works together with the Tiroler Künstler:innenschaft on the realization of Fair Pay – Remuneration for Visual Artists. She considers herself a translator between theory and practice, between classes, religions, geographies and generations.

Johan Frederik Hartle is Rector of the Academy of Fine Arts Vienna, where his responsibilities comprise research, academia, and international issues as well as human resources and finances. Previously he was interim Rector of the Karlsruhe University of Arts and Design at which he held a professorship for Art and Media Theory. After obtaining his doctorate, he was granted research fellowships for Jerusalem and Rome before he became Assistant Professor for Art Philosophy and Cultural Philosophy at Amsterdam University. Hartle’s publications explore positions in contemporary art, institutional art theories, political aesthetics, and the legacy of Red Vienna.

Anke Schad-Spindler has been researching cultural policy, cultural management and cultural education since 2006. Since 2020 she has been working as a research associate (Post Doc) on the project “Agonistic Cultural Policy (AGONART) – Case Studies on the Conflicutal Transformation of Cultural Quarters”. Since 2017 she has been working as a freelance researcher, evaluator and process facilitator for clients such as the Goethe-Institut. In 2019, Anke Schad-Spindler was appointed to the Expert Council on Cultural Diversity of the Austrian UNESCO Commission.

Chin Tsao obtained her BFA in Taipei. In 2021, she completed her Master‘s degree at the TransArts department of the University of Applied Arts Vienna, graduating with a project supervised by Roman Pfeffer and Kathrin Rhomberg.