Touching the Elephant: Practices and Politics of Social Distanc_ing 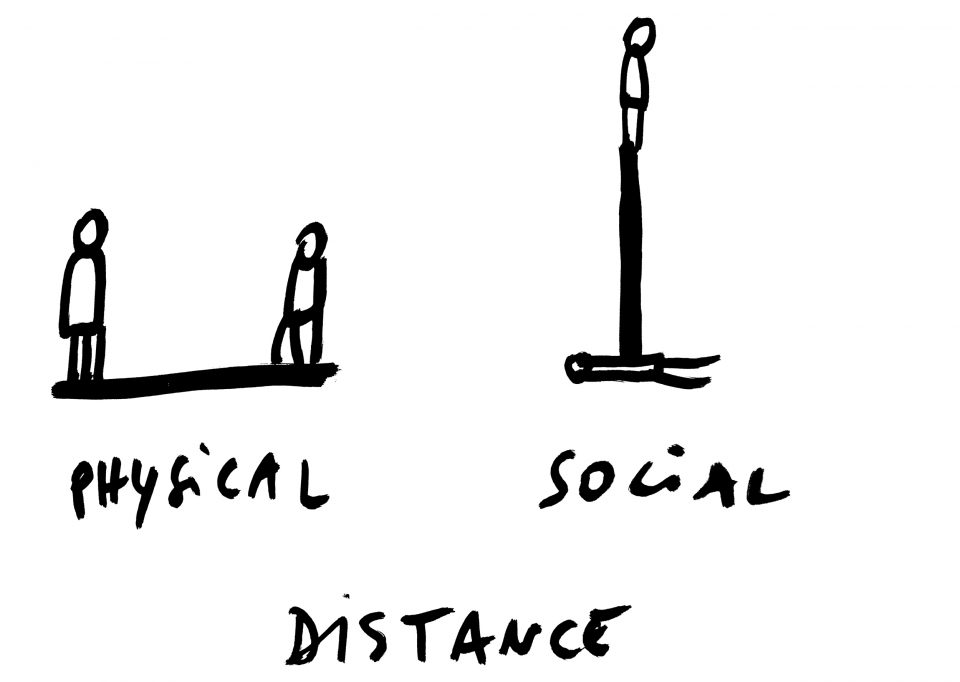 A conversation-performance in the exhibition … of bread, wine, cars, security and peace

In the last week of the exhibition … of bread, wine, cars, security and peace, we invite you to a series of conversations with participants from the realms of activism, cultural production, thinking, and performance to critically ‘approach’ the notion of “social distancing” from different perspectives. Not only due to the various safety regulations, the event itself becomes an experimental setup, in the sense of a shared – a collective yet fragmentary – experience of intimacy and distance. Even before corona it wasn’t given that art exhibitions are social spaces, places to accommodate discussions and collective actions. We want to ask: Hasn’t the proverbial (baby) elephant – the Austrian measure for safe distance – always been in the room, and presumably not just in the art world? Has “social distancing” not rather been an everyday experience for many groups in society for a long time?

These questions also arise in relation to the current use of the term “social distancing”. In the past months, many have noted that this phrase mistakes one thing: “being social” doesn’t necessarily imply physical contact, touching, or being close in the here and now. However, inequality and power relations also find expression in spatial constellations, as sociologist Richard Sennett writes: “Economic inequalities translate in everyday experience as social distance.” Practical difficulties in complying with official regulations and following preventive measures affect, in many cases, groups that were already marginalized by mainstream society. And the so-called “risk groups” are all too familiar with the imperative to withdraw and politely decline well-intended invitations when social spaces are not modelled to their needs for well-being. The techno-culture theorist Nishant Shah states that the promise of intimacy can also be a threat – and suggests that physical closeness and touch do neither axiomatically generate safe spaces nor are they free from privileges and power.

The conversations will explore the political contexts in which structures of exclusion and inequality are expressed as distance; individual forms of reaction manifesting in practices between self-defense and self-empowerment will be discussed as well.

All conversations take place IN the exhibition around the Space of Questions table, however we will deliberately refrain from group discussions. Two conversation partners will take their place at the table at a time, international guests will participate via Zoom. The audience is free to choose their place in the room, can stroll through the exhibition, just consume the discussions per live stream, or submit questions via a special channel on site – a tin can telephone.

“Genuine conversation is not possible until people are within seven meters of each other,” says urban designer Jan Gehl. Which leeways, hideouts, and elasticities does this contact zone hold in store?

And speaking of “practices and policies of social distanc_ing”: we are implementing the new Covid-19 regulations and are changing the setup of the Touching the Elephant talks.

The talks themselves will now be held on Zoom, but are broadcasted live in the exhibition space. This will also allow exhibition visitors to follow them on site. In addition, a terminal will be provided in the exhibition where the Zoom sessions will be screened. Via this terminal it will be possible to post questions in the chat.

To participate in the zoom talks with your own device, please register via this link.

6:15 pm: Reflective distance talk, on Zoom, open for all, 45 minutes (in German/English as required)

Katalin Erdődi is a curator, dramaturg and researcher with a focus on socially engaged art, experimental performative practices and interventions in public space. Currently, she is researching processes of socio-political change in post-socialist rural space through collaborative artistic and curatorial practices. Beyond working in the art field, she is also involved in the work of several independent groups and initiatives, working on migration and labor related issues (a.o. Precarity Office Vienna, Sezonieri campaign).

Vlatka Frketić is an author, writer and activist, who also works in adult education as well as in psychosocial and literary fields. In lectures and seminars, she addresses social inequalities, discrimination, multilingualism, and power from a critical, discourse-analytical perspective. 2019 Kültür-Gemma Scholarship (https://widerdengleichsprech.com/); 2019 Exil literary price. Frketić is a member of the authors’ workshop of edition Exil.

Dan Christian Ghattas is a human rights intersex advocate, who has been working on European level since 2009. Since then Dan has provided expertise to governments and EU, Council of Europe and UN bodies. Dan co-initiated the 1st International Intersex Forum (2011) and co-authored the Declaration of Malta (2013). Further authorship: ILGA-Europe/OII Europe Intersex Toolkit Standing up for intersex human rights – How can you help? (2016), ILGA-Europe/OII Europe Legal Toolkit Protecting intersex people in Europe (2019). oiieurope.org/

Ursula Hofbauer is a Vienna-based artist and architect, urban researcher, strollologoist and THINGeneer who has been working in and with public space in several exhibitions and art projects. Thoroughly dedicated to all questions of democratic use and appropriation of public space and resulting designs. Selected projects: Strange Views (1999), Permanent Breakfast (1999–2005), Through Language (2008), #EchtzeitExperiment (2020).

Araba Evelyn Johnston-Arthur teaches at Howard University in Washington DC, where she completed her doctoral studies in Black Politics, International Relations and the African Diasporan History. Her dissertation deals with practices of un/silencing resistance and the significance of pan-African, anti-imperialist criticism of anti-Black racism in Austria in the early 1960s.

KT Zakravsky/ZAK RAY is a performance and conceptual artist, writer, project developer at the interface of artistic research, social media, urban communities, and spirituality, as well as a former lecturer for philosophy and media/film/gender studies at various universities in Austria. Since 2012 she works as freelancer, most currently in cooperation with Lucie Strecker and Klaus Spiess (Bio-Art, Microperformativity, Ecolinguistics). planetzakra.wordpress.com/; zak ra Youtube Channel

Andrea Hubin is an art historian, educator and staff member of Kunsthalle Wien. Her curiosity and work is directed towards the possibilities of opening up discussion spaces in the context of art.