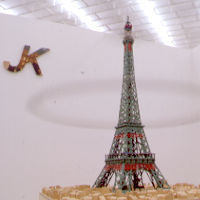 Over the past few years, space has once again become a subject of heated discussions among both artists and architects. The Kunsthalle Wien is presenting these visions on the subject of space as explorations at the intersection of art and architecture. A total of 55 spectacular architectural models and multimedial forms of documentation will be shown together with over 80 artworks, showing how the disciplines can enrich each other and learn from each other.

Architecture supplies spaces with a specific function: a living room, a sales room, a production center or an exhibition space. As was shown by the famous exhibition, Deconstructivist Architecture, at the Museum of Modern Art in New York, architects today are trying to liberate themselves from the cliché of function by playing with aspects of contingency and “systematic disorder”.

As a sort of counter-movement, artists have increasingly begun to work with the functions of the architectonic infrastructure of the exhibition world. Art does not just dispose of work space (i.e., the space occupied by the artwork) but also makes use of the rooms that accomodate it and of its special status. The museum and the studio as essential socio-cultural conditions are analyzed and subject to critical analysis by the artists.

The architectonic projects refer to concrete spaces: i.e., a university campus is interpreted as a convent and completely covered with green surfaces (ACCONCI/MANGURIAN). A derelict innercity area is upgraded by means of special light mise-en-scènes (STUDIO WORKS/JAMES TURRELL), while a house on a cliff is designed so that it defers the promising view of the sea as long as possible (DILLER/SCOFIDIO). In BERNARD TSCHUMIÎs drafts for the Parc de la Villette a total deconstructivist artwork emerges from this huge Parisian city park. Here the architect has used dispersed red clad structures as marking points, large-scale lawn surfaces and a number of individual buildings for culture, sports, recreation, etc.)

ABSALON defines the free space of art by means of a baseless structure shaped like a white extraterrestrial space module. CHRIS BURDEN uses two symbols of technological hubris to build a merry-go-round in which two models of the Titanic dangle from the top of the Eiffel tower, spinning through the rotation at the top of the tower.

DANIEL BUREN has constructed a spatial installation which can be entered by the visitor. Based on a rigid conception of vertical stripes, his work does not relate specifically to the situation but is rather smuggled into the exhibition as a separate mobile space. HEIMO ZOBERNIG uses a white cube to create a contemplative situation on site. In front of this, FRANZ WESTÎs seat objects will be placed (Heimo seat group).

On the intersections between art and architecture there are also hybrid forms such as the models by TADASHI KAWAMATA or DAN GRAHAM documenting architectural sculptures created by these artists in an outdoor setting.

An approx. 120-page catalogue will be published on the occasion of the exhibition with essays by Jean Louis Maubant, Frédéric Migayrou, Christian Theo Steiner and Jehuda Safran. The catalogue will contain some 120 illustrations of the works exhibited.