Alpenblick – Contemporary Art and the Alpine 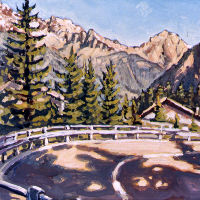 The alps have a long echo. The pictorial and visual conventions that have evolved in the 200-year history of the aesthetic conquest of the mountains are deeply inscribed in us. Given phenomena such as tourism and mass communication this has resulted in a paradox. On the one hand, alpine imagery has remained popular, evoking strong emotions and sentiments. On the other hand, the alpine as an expression of beauty and sublimity has long become something suspect – degraded to a “deplete”.

In addition, there is the mental alpine block that weighed so heavily on intellectual life in alpine countries in particular, as a consequence of close alliances between alpine beauty and reactionary ideologies. Avant-garde art responses to this have been: hate, scorn, denial. Gerhard Richter states that he began painting alpine peaks because it was something that said nothing.
The alpine must thus first be depleted and neutralized before we could focus on it again. The exhibition will present positions of artists from the sixties up to the present and show how the alpine can be transcended.
New life was breathed into this stale subject-matter when artists began to reexamine, and to recode, the hackneyed images and expressions of pathos. Works of some sixty artists can be seen, including McCarthy/Kelley (“Heidi”), Brandl, Cahn, Disler, Doig, Fischli/Weiss, Fulton, Gette, Gursky, Irwin, Klinkan, Lassnig, Long, Mosbacher, Mutean/Rosenblum, Niedermayr, Peintner, Penone, Pongratz, Richter, Schnyder, Signer, Strobl, Weiler, Weinberger, Weissman, Winteler, Zechyr.