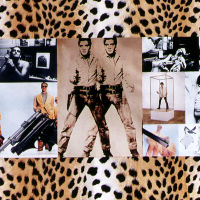 According to history and to the stories surrounding them, angels are ambivalent creatures, by definition questionable beings (Anguéliki Garidis). They are messengers, heralds, travellers between the worlds, between heaven and earth, heaven and hell; an angel may represent Good, salvation or Evil, may be one of the elevated or one of the fallen. His essence is constituted between the ages, between the sexes, between the living and the dead, between mind and matter. Therefore, the angel becomes both a representative of mystery and a reflection of human nature as well as a figure of transcendence, personifying an awareness of possibilities.

Within this range of configurations, the angel has made its appearance in debates regarding art, poetry and philosophy since the beginnings of the modern age: Walter Benjaminís angel, an angel of history as well as a reflection, an angel differing from the existing world, Michel Serresí lost angel, an outsider, and finally the ëempty angelí of Peter Sloterdijk who describes contemporary man as the victim of a mediated world.

The angel figures as a metaphor, a metaphor for identity and individualization, for manís ability to find his place in the world and in todayís world. Within the last decades, artists have made the crisis of identity their subject, have shown the ëempty angelí, and have worked at developing alternatives. A wide range of works is dedicated to transgression, to transformation. The works focus on the ëotherí as counterimage and opposite, but also as an escape from earthly bonds and a metamorphosis of those qualities attributed to the human body and human existence.

Angels do carry more than messages, they convey forms of representation, thus turning into ënecessary angelsí (Massimo Cacciari). The angel becomes an aesthetic symbol, a metaphor for divining the contents of the visible, its ideas and its hidden truth.

The exhibition shows works by more than 50 artists facing the challenge of the ëotherí – of the dark side of being, of transgression, of escaping the real, of the changeability of human nature and of possible metamorphoses. The focus being on contemporary art, the retrospective only spans a limited period of time – starting half a century ago, when artists began to introduce the immaterial as an idea of something completely different. Since then, art has claimed the process as one of its dimensions.

This immaterial aspect, this element of transcending the world implicitly comprises the outward appearance of man. The elliptic retrospective on Yves Klein captures this paradigma of transgression.

After a retrospective introduction, the exhibition proceeds with confrontations, stylizations and transformatory movements regarding the bodily, the sexual and the social ëpersonaí – both the body and the face becoming surfaces on which ideas are projected. The central part of the exhibition shows works by Bruce Nauman, Andres Serrano, Nan Goldin, Helen Chadwick, Inez van Lamsweerde, Hermione Wiltshire, Elke Krystufek, Greer Lankton, David Wojnarowicz, Gary Hill a. o.

With the emergence of the face, the attention centres on phantasies and phantasmata which – towards the end of the tour – reveal reflections and notions of the ëotherí. In this context works by Thomas Ruff, Jean-Pierre Bertrand, Javier Peréz, Mary Carlson a. o. are presented.

Six musical events, scheduled for the months from June to September 1997, will accompany the exhibition.

A film programme concerning the project ëAngel, Angelí will be shown at the Filmhaus Kino from 29 August to 4 September 1997.