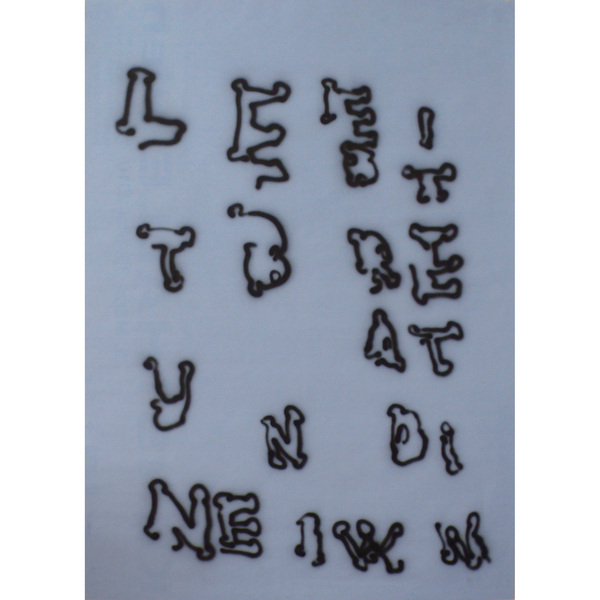 David Jourdan
Born in France in 1974
Studied in Vienna

The title of David Jourdan?s work is untitled (ABBDEEEEIIILNNNRTTTUW). It consists in the alphabetically arranged letters of LEBT UND ARBEITET IN WIEN. Repetition, trial, and failure are integral parts of David Jourdan?s work. His practice-oriented approach resembles the first scribbling of children who use a new tool and fathom its possibilities. Jourdan?s conceptual strategy also relates to street and graffiti art. He is concerned with forms of self-empowerment and anti-authoritarian gestures of self-education. In the act of writing, the individual hand becomes an artwork transcending the subject, and the writer?s identity disappears in the aesthetical symbol that questions everyday semiotic sign systems.

?I will stutter in writing. And repeat it in order to start somewhere. Like a babbling baby whose doubling of the first syllable is not only a step toward language, it is already language which makes further expression possible. I will double the words ?Lebt und arbeitet in Wien.? It could be used as a public announcement of the Lebt und arbeitet in Wien exhibition; it could just be a personal statement as well: I do live and work in Vienna. To be repeated about 50 times, in an indefinite play, for the according windows of the project wall. I will get cracking with spray paint writing on paper. It sounds appropriate. The starting point is a shaky handwriting with a marker pen.?
(David Jourdan)