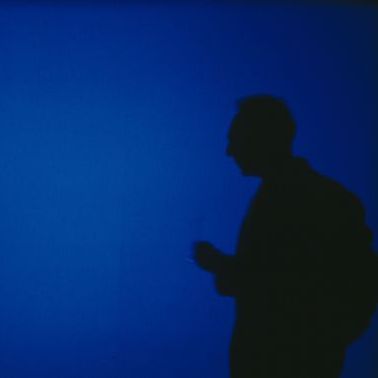 The artist and film maker Derek Jarman (1942−1994) is regarded as the most eminent representative of British independent cinema from the 1970ies to the 1990ies. In his strongly autobiographical work, film, painting, stage design, and text overlap to form an impressive gesamtkunstwerk of political impact. His works document socially explosive issues such as the punk movement, the protests against the Thatcher regime, the homosexuals? fight for their rights, and the AIDS crisis.
The exhibition Derek Jarman. Brutal Beauty confronts Jarman?s extraordinary monochrome cinematic work Blue and a Super 8 film installation with paintings and assemblages partly never shown before. Made one year before Jarman?s death, Blue offers a moving portrait of the artist shortly before he was losing his sight. The screen does not alter during the 74 minutes of the film, which is to be read as a homage to the French painter Yves Klein.
Photographic lightbox works by Isaac Julien, curator of the exhibition and an important contemporary artist and film maker himself, convey an impression of Jarman?s famous Prospect Cottage and his garden in Dungeness, Kent. Above all Isaac Julien?s 2008 film Derek elucidates Derek Jarman?s life, art, and impending death. It is based on an interview with Jarman conducted by the author and producer Colin MacCabe; the film?s narrator is Jarman?s favorite actress Tilda Swinton.