Edith Dekyndt. The devil is in the details 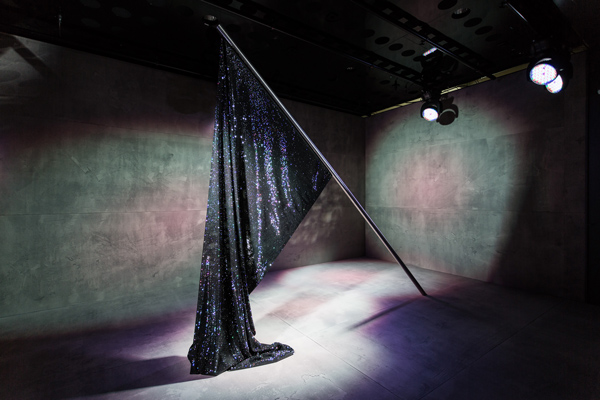 In The Devil is in the details, Edith Dekyndt (*1960, Ypern) explores a fascination with the impact of the color black; the work will be available for viewing in the display window on Kärntner Straße. The artist, who has made an in-depth study of colors, their codes, and their significance, places black at center stage, expressed through a powerful symbol in the form of a black, crystal-encrusted flag, anchored in the display window at Swarovski Wien. Through its crystalline design, the emblem radiates onto its surroundings, prompting viewers to question the conventional understanding of black.

Black is used to describe darkness, death, fear; it serves as an allegory for the phenomena that permeate our ordinary lives and still remain beyond our control. Synonymous with negative, black is anti-color, emblematic of anarchy, rebellion, and insubordination. At the same time, in its flag form, black attains another shade of meaning: the black flag stands for death – but it also signifies freedom. Since the 18th century, it was a visible symbol for pirates who submitted to the authority of no state government. The Stage gains an additional facet with this association: history tells us that pirates have always been connected with secret treasure troves and chests full of sparkling gems. This is why the flag is made of jet-black material set with crystals, which are used as the foundation for jewelry. And so, Dekyndt has staged a titillating game of opposites.

Blurring the boundaries: discussion during Vienna Art Week on October 3, 2014