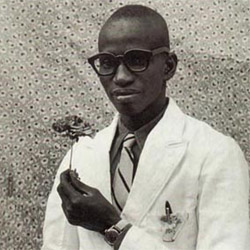 Africa: Terra Incognita? Or the Heart of Darkness? Or maybe even the “Chic Continent”, as one proponent journal of the zeitgeist once put it? The exhibition “Flash Afrique” of the Kunsthalle Vienna wants to tell one of many possible African stories on the basis of some examples of West-African photographic work. Or, to put it more precisely, to have it told by the artists themselves. Because, as the philosopher Homi K. Babha has noted “the right to tell a story is more than just an act of linguistics.”
This is a story, which deals with the tensions arising between a staged self-stylization and a de-limited everyday life. A story, which shows how surrealism entered into the professional photographic studios of Western Africa and held sway in the streets of Dakar and Abidjan.
In conjunction with a music program and a symposium, a dialogue scenario is to be opened, to generate materials that would discuss the complex relation between Europe and Africa within the framing conditions of the 21st century. “Africa”, says documenta-chief executive Okwui Enwezor, “must stop being the subject of the origin of Europeans? psycho-sexual daydreams and nightmares.”