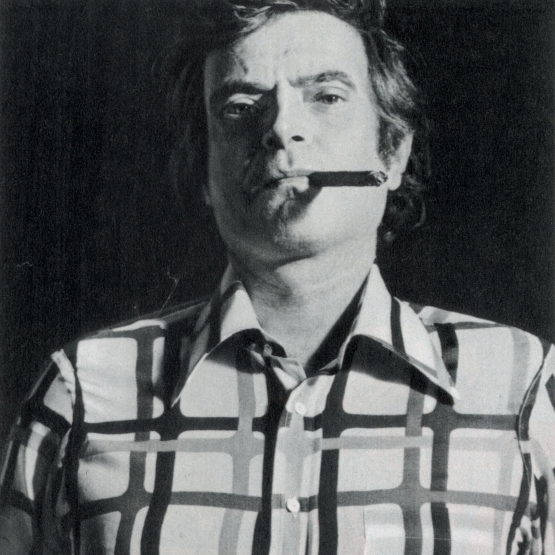 Marcel Broodthaers (Brussels, 1924 – Cologne, 1976) launched his entrance into the arena of the fine arts as an openly strategic exercise: ?I too have wondered whether I could not sell something and be a success in my life… Eventually the idea came to me that I would invent something insincere, and I immediately set to work”, as he proclaimed on the invitation cards to his first exhibition in 1964. They were printed across a four-colour advertising spread in a magazine.
Broodthaer’ s thought-figures operate in an imaginary sphere: the real can only be approached via the fictional. The foreign object, the stereotype of distance, of exoticism, of the uncertain journey serve him as lines of retreat in the hard trade of the economy, which each item of (artistic) production is subject to, addressing as it does the market of the money, i.e. of the ruling Capitalist culture.
With an infallible instinct Marcel Broodthaers changed to and fro between various media and roles, and different worlds and languages. His position was always one of acceptance, of entering into new ventures and daring to cross to foreign shores – even at the risk of disappearing from sight.
The exhibition will attempt to use a small selection of editions, graphic works, slide projections and films, to illuminate some aspects of the increasingly tightening tangle of relationships within Broodthaers’ work. His projections – whether cinematic or photographic – are fundamental starting points in his involvement with the imagination and the deceptiveness of apperances.