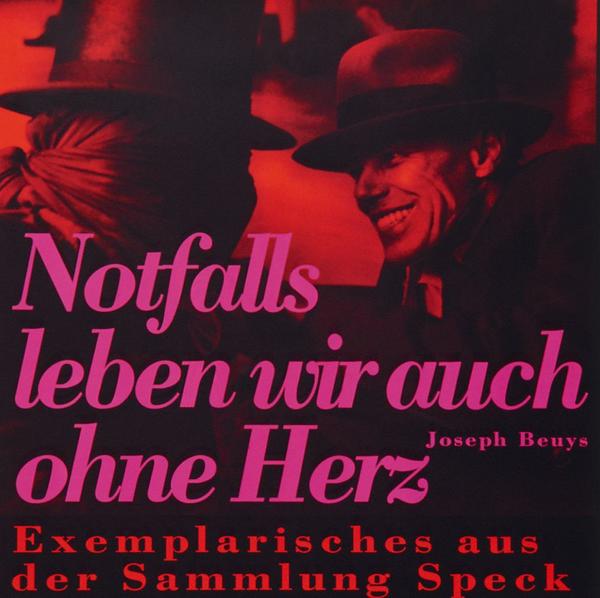 The personal relationship between Joseph Beuys and the Cologne physician Dr. Reiner Speck was decisive for the creation of an impressing, even unique collection of art of the past 40 years. While Joseph Beuys was recovering from a heart attack in July 1975, Reiner Speck gave him the novel “The Journey of the Young Anacharsis through Greece” (Jean-Jacques Barthélemy, 1788). The artist added his ECG, a razor blade and two bay leaves to the book, creating the piece “Otherwise we’ll live without heart”. With this call to persevere he made an appeal to human warmth and love.

In the past few decades the passionate collector and book aficionado Reiner Speck has brought together large series of pieces by internationally important artists. The list of artistsë names resembles a hit list of art from the past four decades. The exhibition will show more than 200 exemplary pieces – paintings, sculptures, drawings as well as a special section on books by artists. The older generation includes artists such as Carl Andre and Lawrence Weiner and the younger generation Walter Dahn and Rosemarie Trockel.

An enthusiasm for the printed word or image, literary works, everyday and poetic communication is shared by the majority of artists in the Speck collection. These artists are hunters and collectors themselves, rummaging the world in their search for motifs for artistic manifestations. They have found material for their work in books, as Broodthaers, or in old journals, as Polke, or in so-called pristine nature, as Fulton. Not just vision and reading form a red thread running through the exhibition, but also movement. Hamish Fulton describes movement as manës most elementary way of relating with his surroundings. For some artists excursions, journeys or even expeditions mark the beginning of an artwork, as for instance Kirkeby‘s painted abstractions (based on travel impressions and sketches of his expeditions through Scandinavia and Brazil) or Fultonës drawings documenting his journeys through unpopulated areas. Other artworks require that the spectator walks on or around them: Carl Andre‘s steel sheets

(“81 Steel Cardinal”), Hubert Kiecol‘s post-minimalist concrete columns or Lawrence Weiner‘s huge text JUST ANOTHER MOVEMENT OF THE TIDE (IMPAIRED). Here the artist makes a concise reference to the remote cyclical movement of the sea, which remains unaffected by human activity.

Mobility is also required by those artistic contributions placed outside of the Kunsthalle. Günther Förg will design new paintings for the six ShowCases of the Kunsthalle – like gray slate sheets with white strokes and grids. Mario Merz will mount seven neon numbers on the roof of the Kunsthalle-Café (“Progressione di Fibonacci”, 1971).

The catalog to be published on the occasion of the exhibition will include texts by artists, essays as well as studies on selected series of works. Rosemarie Trockel will design a bookmark for the catalog. Following authors will contribute to the catalog: Franzobel, Rudolf Haller, Cornelia Klinger, Johannes auf der Lake, Ruth Noack, Ralph Rugoff, Reiner Speck, Jan Tabor, Freddy de Vree.