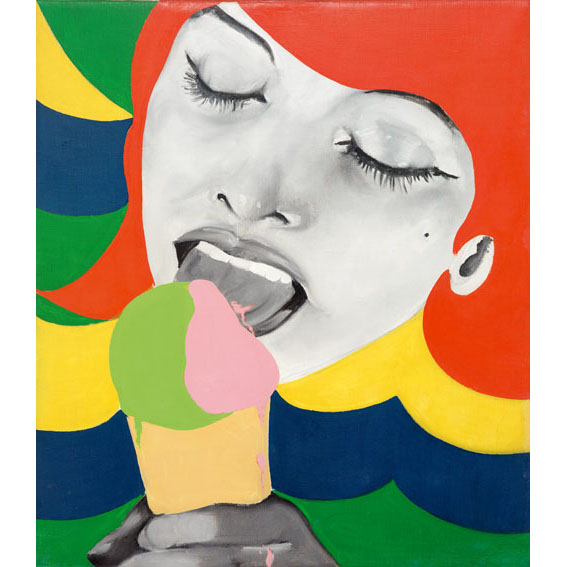 “The next great moment in history is ours!” Dorothy Iannone

Rediscovering outstanding women Pop artists, POWER UP fulfills Dorothy Iannone?s combative promise after fifty years. The show aims at the reinterpretation of an art movement that until today has primarily been associated with male protagonists. Plastic, loud colors, reduced forms, and graphic contours ? the nine women artists? works on display resemble those of their male colleagues in many respects. Whereas their works appeal to the taste of the masses, these artists, as pioneers of Feminism, have remained belligerent and critical. They reveal the consumer culture?s superficiality, exposing the commodity myth as an empty shell like Christa Dichgans, ironically transforming everyday objects to oversized kitsch objects like Jann Haworth, or exploring mass media clichés and superstar constructions like Rosalyn Drexler. Like Sister Corita, a committed peace activist, they took a clear stand on the sixties? social and political events such as the Vietnam
War.

The exhibition pursues its political perspective in those instances where the era?s current notions of what a woman is are revised by different views: Kiki Kogelnik and Marisol describe the corset in which the representation of women by themselves and by others is caught, while Evelyne Axell or Dorothy Iannone provocatively display the nude body, love, and sexuality, and, like Niki de Saint Phalle, attract the viewer?s attention with sophisticated modes of self-presentation.

This exhibition will also be shown in: