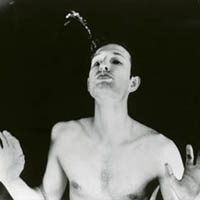 The work of the writer Samuel Beckett and the artist Bruce Nauman is among the most influential of our time. They both share an elemental preoccupation with the body and space. They pose fundamental questions facing humanity in the contemporary world, questions concerning the “condition humaine” and human identity in a manner which is both uncompromising and free from illusions. This exhibition represents a first attempt to bring together these two unique, intense and highly complex artists in one concept and space. More than any other artists, Beckett and Nauman offer an experience that stimulates the public to detach itself from its familiar modes of perception and of thought, to open itself to other conceptions of space.

Beckett liberated the stage from all excess, and honed the role of the human being to the basics of man’s existence, to love, power and identity. Inspired by the media, he goes beyond text to use the stage as a sculptural space. At the end of this development Beckett demonstrates how he continues his literary project ‘without language’ in the medium of film, for example in Quadrat (1982). Here he designs an imaginary space of light, movement and sound, and executes a kind of squaring of the circle from language to space. Beckett defines spaces using the people (the actors). Nauman turns this situation around and draws the line of the stage around himself and then his viewers. His “mental spaces” – as, for instance, in Dream Passage II – only function through the viewer, whose position he defines by means of his spaces and corridors, so causing a radical shift in the relationship between the artwork and the public. The work of both artists is thought through down to the smallest detail. All extraneous ornamentation has been eradicated to create a reality of bodies in spaces and states of experience that are more than realistic and utterly disillusioning. Their art has nothing to do with a sense of compensation, with reconciliation or with edification. Art takes over. Both argue from a position of deliberate social isolation, and try, or have always tried, to avoid the mechanisms associated with art and fame, and to radically question the role and purpose of art and artists.

For the exhibition in Vienna, significant selections of manuscripts are being released from several archives for the first time. These documents include six notebooks for the novel Watt, which had an influence not to be underestimated on American Minimalist art and was particularly instrumental in strengthening Bruce Nauman’s perception of space. These documents are to be presented along with photographs and first editions in over twenty showcases. This display will provide an insight into the profound extent to which Beckett’s thinking was both conceptual and visually orientated. Fifty of Bruce Nauman’s drawings are to be on view, mostly from the period 1966 to 1984, as well as sculptures and installations such as Dream Passage II. A world premiere: the large installation False Silence (from 1975), one of the central pieces in Nauman’s ?uvre, is being constructed specially for this exhibition and shown for the first time. False Silence is an impressive claustrophobic, long and narrow piece with “discomforting” triangular spaces. It is his only piece to employ corridors that are elaborated with spoken text.

Films and videos by Nauman and Beckett’s productions for television and radio, as well as his only film, Film, with Buster Keaton, form a further major focus to the exhibition.