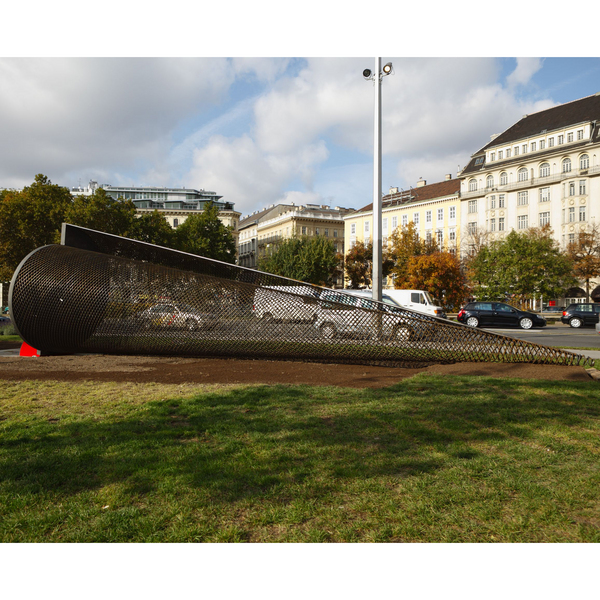 The Swiss artist Not Vital?s works know no boundaries between the real and the surreal. Conceived in the spirit of minimal sculpture, his forms, which breathe the artist?s fascination for myths, legends, and rituals of different cultures, interweave stories and legends from the region of the village Sent in the Engadine, where Vital was born, with those of faraway places. Whether sculptures, architectural constructions, drawings, photographs, or installations, all of Vital?s works focus on nature, on the natural cycle of procreation and death, of becoming and passing away, as their central subject.

The temporary variation of his architectural constructions Not Vital designed for Vienna is a 10-meter-high conical sculpture called Sleeping House, which, like a living being, rises in the morning and retires to rest in the evening day after day. The Sleeping House, which plays with Vital?s penchant for oscillating between reality and surreality, may be accessed in its ?waking phases? during the day.

Not Vital was born in Sent/Canton Graubünden in Switzerland in 1948; he lives and works alternately in Sent, Agadez, New York, and Beijing.

By courtesy of Galerie Thaddaeus Ropac