sculpture: Stefan Sagmeister “Everybody Thinks They Are Right” 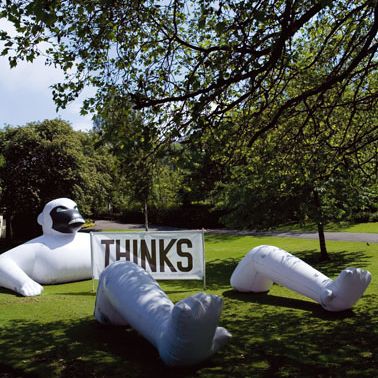 One larger-than-life monkey with grim expressions welcomes passersby and motorists on Kunsthalle Wien public space karlsplatz. Viewers will feel reminded of the wise monkey in Buddhist-Shintoist religion that ?sees no evil, hears no evil, speaks no evil? or fathom the animal?s symbolism as fabulous beast, which is described as either particularly stupid or extraordinarily shrewd.

For the designer and graphic artist Stefan Sagmeister the inflatable object stands for man?s hubris, prejudice, and vanity. Convinced that all human conflicts in history may be explained by one sentence, i.e. ?EVERYBODY THINKS THEY ARE RIGHT?, Sagmeister aims at inviting critical self-reflection with his three big monkeys.
Design and typography: Stefan Sagmeister, Matthias Ernstberger
Production: Joel Mangrum, Sportogo Inc

Stefan Sagmeister, born in Bregenz in 1962, runs his studio Sagmeister Inc. in New York and ranks among the stars of today?s graphic design scene. He became known above all for designing record and CD covers for international pop stars like the Talking Heads, Lou Reed, and The Rolling Stones.