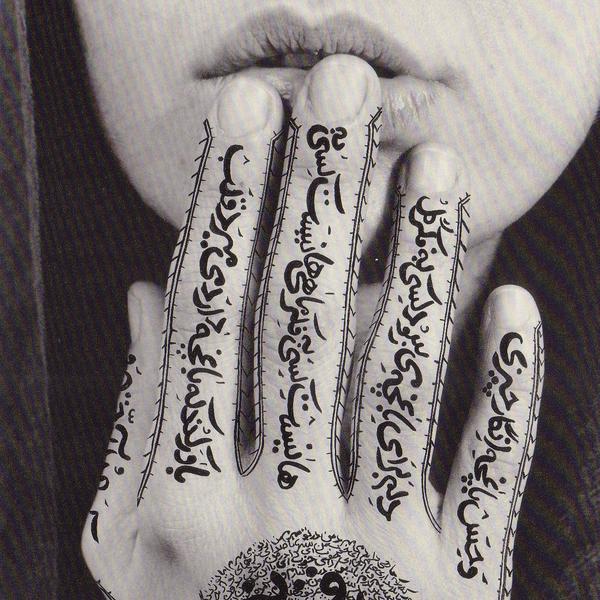 As a teenager, Shirin Neshat went to California to study art. When she visited Iran again in 1990, after
the revolution of the ayatollahs, she found the country entirely changed. As a consequence, she began
to make her impressions one subject of her artistic work. In doing so, she consciously refers to the
social, cultural, and religious codes of Muslim societies, using telltale symbols while at the same time
carefully avoiding unequivocal readings of her work.
In her comprehensive photo series Women of Allah, made between 1993 and 1997, she confronts
pictures and text by inscribing Persian poetry on hands, faces and bodies. Calligraphy thus becomes a
part of the picture and the story it tells. She takes the offensive by taking up cliche views of the Islamic
world ? for example, women wearing the chador ?, thus calling into question the values and notions of
both religious fundamentalism and feminism. What becomes clear in this is that she is not out for
simple answers or superficial propositions: Neshat?s women look us in the face with a self-confident
gaze, as strong and active personalities. A veiled woman with a rifle in her hands does not merely
appear as a victim of a re-pres-sive system.

In the late 1990s, Shirin Neshat began to concern herself with the medium of video. In doing so, she
makes reference to both Western and Islamic film-makers, thus instigating a dialogue of cultures. What
is of particular interest to her about post-revolutionary Iranian cinema is its specific imagery and
language; a language that does not cross borders, but directly addresses them, thus highlighting
details of a culture which otherwise would have been difficult to discover. Neshat says about these films
that their “approach is simple, concise, poetic, minimalist and powerful as it criticizes society without
claiming to do so.”

The exhibition gives a survey of the work of this artist, born in 1957, who recently received an
International Award at the 48th Venice Biennale. The Kunsthalle Wien shows as a premiere the trilogy
begun with the films Turbulent (1998) and Rapture (1999), concluding with the third part Fervor (2000) of
which Shirin Neshat recently finished shooting in Morocco. The video installations all focus on the
polarity and the dynamic between the male and the female gender in a world full of rules and taboos.
Shirin Neshat creates with this double projections a dualistic space which makes it hard for the viewer
to stay neutral.

An exhibition organised as a partnership between the Kunsthalle Wien and the Serpentine Gallery,
London; it will be on show there from July 28 to Sept. 3, 2000.