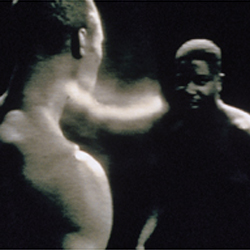 With his powerful, mostly silent films, Steve McQueen, born 1969 in London, has meanwhile become something like a secret star of the international art scene. His short art films are modern in a classical sense. Their emotion-charged directness is stunning, and
they are characterized by an impressive minimalism in the use of filmic means.

In 1999, Steve McQueen received the Turner Prize, Great Britain?s most distinguished award for contemporary artists. In the Kunsthalle exhibition, the first-time-ever presentation of Steve McQueen?s work in Austria, the artist will be showing some earlier films, but also his most recent pieces. One special treat in the exhibition will be his latest film, TRICKY (2001).

A catalogue-textbook will be published for the exhibition, featuring an interview Gerald Matt made with the artist as well as contributions by Ilka Becker, Doris Krystof and Thomas Miessgang (approx. 100 pp.and ill.)