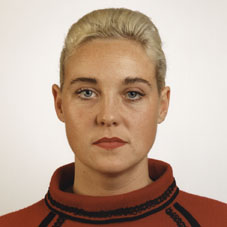 Thomas Ruff numbers among today’s most important photographers, his oeuvre encompassing such diverse subject areas as people, architecture, the universe, and the Internet. With its extensive solo exhibition presenting a total of about 150 works, the Kunsthalle Wien offers the first comprehensive survey of the artist’s manifold production in Austria.

Thomas Ruff strikes us as a sharp and concentrated observer rendering his motifs with a hyper-precise, chirurgic gaze. To him, the objective representation of reality is no neutral process, but something questioned with each new photograph. Running through the exhibition like a thread is the apparent pair of opposites of surface and depth and its highly variable manifestations. Next to his series of large-format portraits from the 1980s, for which Ruff received international acclaim, and his architectural photographs of buildings by Herzog & de Meuron, which are based on instructions, the show focuses on his most recent cassini and zycles series. Digitally processing images of the planet Saturn and its moons from the NASA website, the artist explores the notions of the exemplary, of reality, and of zeitgeist. Also depicting the pair of concepts surfaces/depths, the seemingly three-dimensional curves of Ruff’s zycles unfold the sensory experience of roaming virtual depths reserved to the human eye alone.

Thomas Ruff, born in Zell am Harmersbach in the Black Forest in 1958, lives and works in Düsseldorf.