Ugo Rondinone – NO HOW ON 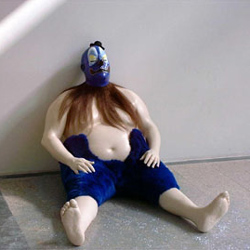 The artist, Ugo Rondinone, born 1963 in Switzerland and currently living in New York, is a multimedia romantic. He creates suggestive atmospheres by means of highly artificial installations, which have a direct affect on the contemporary feeling for life. Colored lights and seductive music may beguile the observer, but closer inspection of the environments of the photos, sculptures, texts, pen drawings, and filmstrips reveals the odd ruptures and irritating alterations that are always present in Rondinone’s pictorial world. His technique consists of a highly complex system of sampling and survival: references back to the history of art, film, and design influence his pictorial language as much as a distinctive sense of poetry and music. Rondinone does not show his work merely in the context of the art institute, but, rather, he presents it on his own specially prepared stages, in cubes, chambers, and walls that are constructed of wood planks; coarse, sometimes untreated, sometimes painted in crème color. With this strategy of distancing, Rondinone spatially creates a feeling of isolation and loneliness. In his confusingly beautiful installations, the artist takes an exemplary role: in the photos he acts not only as an androgynous being, but also as a hybrid dandy, oblivious clown, or extroverted melancholic.

This meanwhile internationally successful artist is being shown for the first time in Vienna, where he studied from 1986 to 1990 at the Hochschule für Angewandte Kunst (Academy of Applied Arts) with Ernst Caramelle.