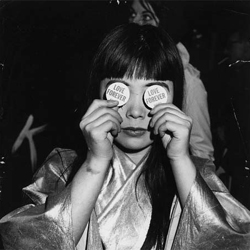 With her obsessive objects, installations, and environments, Yayoi Kusama, one of the most versatile and internationally most successful contemporary artists from Japan, -has won much attention since the 1960s. Kusama?s universe is made up from dots and infinite meshwork structures, which characteristically proliferate from watercolors, drawings, and paintings onto objects and entire rooms. Neighboring on Pop Art, Minimalism, and Abstract Expressionism, Kusama has developed an oeuvre which is strongly informed by political and feminist issues as well as by mystical ideas and which she prefers to refer to as ?obsessional art?.

Featuring a series of new room installations, the Kunsthalle Wien presents, for the first time in Middle Europe, a major personal exhibition of the artist who has become known as the ?polka-dot princess?.

After her studies of classical Japanese Nihonga painting, Yayoi Kusama (b. 1929 in Japan) broke away from the narrowness of her parental home and the Japanese society in 1958 and went to New York City to find the freedom she needed to pursue her artistic work Starting from painting, Kusama?s work expresses ideas such as the obliterating of the distinction between the artwork, the artist, and life, develops environment concepts from the principle of the serial all-over, and formulates approaches that were later taken up again from feminist art positions.
Even in her earliest paintings and drawings, infinite net structures, spots and dots create an expanding and pulsating visual universe the origins of which Kusama herself traces back to childhood visions and hallucinations. Her passionate expressiveness soon went beyond painting, and the characteristic Polka dots and Infinity Nets of her imaginative world started to overgrow ? as phallic protuberances, noodles, or simple points ? objects, furniture, and finally, entire rooms. This lead to the first environments in the mid-60s, in which Kusama, using repetitive patterns, serial structures, countless dots, and a vast variety of materials, worked on creating an illusion of the obliteration of objects, spaces, and people.

The idea of ?self-obliteration? is also crucial to the nude performances, announced as body and love performances, which Kusama made, beginning in the mid-60s, mainly in public places in New York City. These performances responded to virulent political issues of the era such as the Nixon affair or the Vietnam War, or related to cultural political developments such as the increasing commercialization of the art market. Thus Kusama expressed criticism of established art-world conventions at the 1966 Venice Biennale when she, in a spontaneous action, offered the silver balls from her outdoor Narcissus Garden installation to visitors for sale, for two dollars each.

In the 1960s, Kusama?s work was read in America in the context of Pop Art, Minimal Art , or Abstract Expressionism. Her ?Infinity Nets?, paintings without composition consisting of endless net structures, at first sight seem to combine the painterly approach of Abstract Expressionism with the reduced aesthetics of Minimal Art. Her collages and furniture objects, in which the principle of serialization is applied on the basis of everyday objects, were seen as related to pieces by pop artists like Warhol, Rosenquist, or Oldenburg. However, Kusama does not comment mass culture; unlike the industrial materials and makings of minimal art, her objects are deliberately given organic shaves and have a handmade quality. And while Zero and other groups of the ?New Tendency? in Europe, in whose exhibitions Kusama participated in Italy, Germany, and the Netherlands in the 60s, made the artist-subject step to the background, placing the focus on explorations of material, color, light and motion instead, Kusama?s personality, with all her inherent contradictions, is inscribed in each of her
pieces, and self-enactment is an integral part of her oeuvre.

In 1974, Kusama returned to Japan and started to write autobiographical narrative texts and poems about her New York time and experience, which are read by a growing community of Japanese fans and have received literary awards. It took until the late 1980s that her significance as a visual artist for both younger generations of artists and art history was rediscovered and appreciated in numerous exhibitions. In 1993, she was the first artist ever to be given a single exhibition at the Venice Biennale
Japanese pavilion.

The Vienna exhibition features new room installations which, in the playful and obsessive manner they incorporate repetitive structures and reflections, carry the disintegration of object and surrounding space, as intended by Kusama, to a new height. Against the background of an encompassing exhibition design by the Pauhof architectural team, which takes up the ideas of reflection and repetition, Kusama?s infinite universes become a palpable experience in the environments. Aside from videos, slide shows, and fashion designs, two installations from the 60s, Narcissus Garden and Infinity Mirror Room ? Love forever, will also be shown in the exhibition.

We thank our sponsors ANA, All Nippon Airways and the Embassy of Japan for their support as well as Prodomo for the loan of the furniture for the installation ?I?m here but nothing?.