Judith Goetz: Gender as a systematically relevant category during the coronavirus pandemic 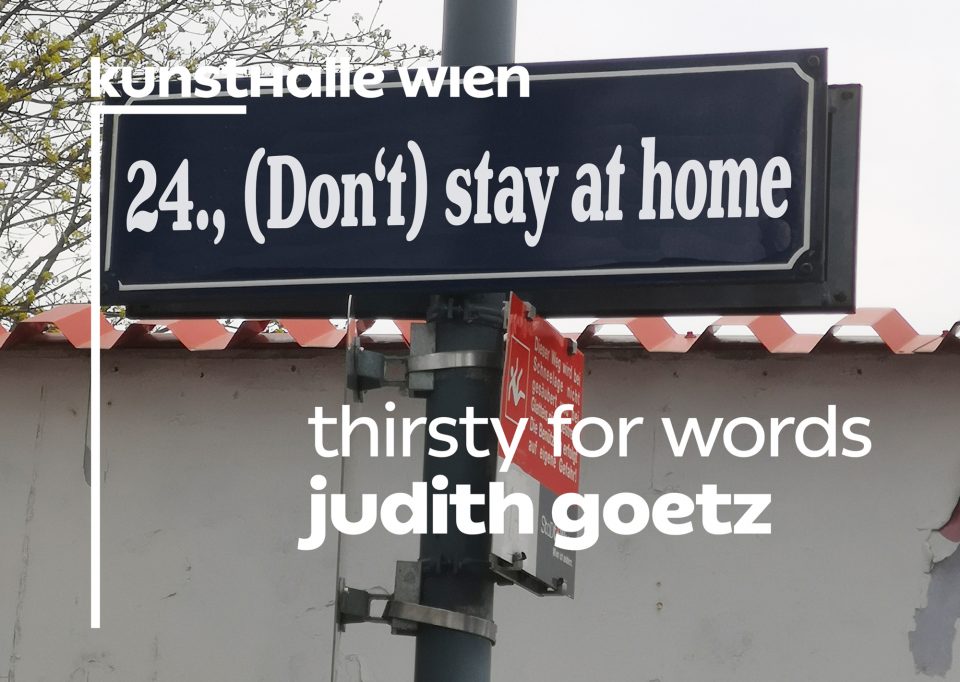 In the words of Marxist feminist Frigga Haug, crises “can be understood as interim periods, when the familiar order has ceased to function and a new set of rules have yet to be established.” This characterisation as an intermediate status quo is also true for the current coronavirus crisis, which has required millions of people to re-organise their professional and social life, as well as the gender-specific arrangements associated therewith in a breathtakingly short period of time. What might have been understood as an opportunity to re-negotiate gender relations, however, has ended up harbouring the danger of a further escalation of social grievances. This includes, for example, an increase in violence within the close social environments, the revival of traditional, gender-specific role patterns, and the resulting financial dependencies. Anti-feminists, on the other hand, are quite pleased with these developments.

The gender-specific effects of the pandemic and of the lockdown can be seen in the world of employment, amongst other things. Particularly the gender-specific occupational pattern, which has persevered until the present day, results in additional workloads for many women. Due to the fact that women are often subject to precarious employment or work in service-industry jobs that are not considered systemically relevant, they are affected more by low wages, terminations or short-time work, as well as an increased risk of poverty and existential fears resulting. In contrast, significantly more women work in systematically relevant professions, which also tend to be badly paid however, such as in the fields of food retail or nursing. Having been ‘pillars of society’ or ‘systemically relevant heroines’, during these past few weeks, they have not only faced considerable levels of stress and overload but also a greater risk of infection. On top of that, there are double or multiple stresses to cope with at their “home sweet homes”, where for instance, three out of four mothers, but only two out of three fathers, look after their children while working from home, and where women (often at the expense of their own financial security) take on the greatest portion of reproductive work, home education, and care for sick family members. The fact that men often have a higher income also leads to women giving up their gainful employment in exchange for childcare or other (unpaid) care activities. Already before the pandemic, roughly half the women in Austria were working only part-time, not least to make their familial and professional duties more compatible with one another. Thus, the findings from a study carried out by the University of Vienna during the coronavirus crisis hardly seem surprising: the study concluded that women are significantly more dissatisfied with the situation than men “because of the relatively high demands of household chores and childcare, which were mainly shouldered by women already before the crisis, the increase of which has multiplied a great deal since the beginning of lockdown restrictions.” A fair re-negotiation of gender-specific arrangements is nowhere to be seen; quite to the contrary – traditional gender roles that had been believed to be long gone and their related distributions of duties have come to new life during the current situation of crisis, and relationships of dependency have intensified.

Women, (rather not) stay at home!

It does not come as a surprise that initial data from other countries have shown a significant increase in domestic violence since the beginning of lockdown measures. This is in line with the many years of experience of Austrian women’s shelters, which see a rise in domestic violence whenever families tend to spend much time together, for example, during the Christmas holidays. This is heightened by the fact that times of crisis accompanied by the enormous psychological stress that is caused can be perceived as an insult of male pride, thus increasing the aggressive and violent potential of men with corresponding dispositions. It is not rare that frustration over a job loss, over-cramped living conditions or increased boredom, as well as job-related stress are taken out on their partners or children. One example is an attempted murder that took place in Baden (Lower Austria) at the end of March 2020. A man had beat his sleeping wife nearly to death with a wooden log in the middle of the night. When asked for the reasons during his interrogation, he said that working night after night from home had “overwhelmed” him. In Italy, a man even strangled his partner because he thought that she had infected him with the virus. In April 2020, the Austrian women’s emergency telephone service Frauenhelpline recorded a 70% increase in the number of calls while the number of restraining orders had increased only slightly. Experts believe that the lack of a significant increase in Austria up until this point might have a variety of reasons: it might not always be possible to make undisturbed phone calls; women might not be informed correctly about their options (or not informed at all); the driving force of an encouraging exchange with others might be lacking due to the contact restrictions, or financial hardship due to a job loss or short-time work might exponentiate dependencies. There are even stories of men taking their partners’ mobile phones away from them. The statement of the Austrian Federal Minister for Women and Integration, “We have succeeded in providing help to every woman in need,” does not only seem far-fetched, but also represents a minimisation of the situation. Particularly because violence in the close social environment is a permanent societal problem that only peaks during times of crisis, government measures like the campaign Sicher zu Hause (“Safe at Home”) or a budgetary increase for the women’s helpline have long been overdue. Already before the coronavirus crisis, many women’s organisations have been directing their criticism of the dwindling of financial resources for violence protection and prevention during the past few years towards the conservative/green government. This makes it all the more important and necessary to keep relevant campaigns and institutions funded even after the pandemic. However, as austerity measures can be expected with certainty, this might mean the end of this hope.

How anti-feminists are utilising the coronavirus crisis

For example, U.S. Archbishop emeritus Raymond Leo Burke construed a connection between the virus and anti-discriminatory gender policies: as he put it, “Great evils like pestilence are an effect… of our actual sins”, those being, amongst other things, abortion, assisted suicide, LGBTIQ* rights and the “devastating effect on individuals and families of the so-called gender theory.” In addition, he emphasised “the necessity of Catholics to pray and worship in their churches and chapels” despite measures of social distancing – otherwise, gender theory would be winning. Likewise, Turkish Minister of Religious Affairs, Ali Erbaş, linked the outbreak of COVID-19 in his first sermon on the occasion of the month of fasting, Ramadan, to homosexuality and being unmarried, which brought about illnesses and caused a whole generation to rot. It does not seem surprising that his statements received the backing of the Turkish President, Recep Tayyip Erdoğan.

Quite in line with this, anti-feminists are overjoyed with the societal backlash described above, which has been forcing men and women alike back into more traditional roles and dependencies. They are glad that discourses of gender equality have been silenced, that mortality statistics do not indicate a third gender, and that access to abortions has become more difficult. On top of that, they feel that their concept of the heterosexual (nuclear) family as a bulwark in times of crisis has been proven right, thus receiving its duly wished-for revaluation. Particularly in crises, they argue, stereotypical role models bring about comfort and security. One of them, German anti-feminist Birgit Kelle, celebrates the fact that the coronavirus crisis created a “new self-confidence of mothers”, who “in the very moment when public order and its artificial pressure on mothers collapse, matter-of-factly return to a role that some never even left on their own accord, but which they were forced to abandon.” Another anti-feminist triumph is the fact that home-schooling “has become possible suddenly and extensively”, thus finally bringing education back under parents’ control – protecting children from the harmful influence of school education and the influence of early sex education in particular. Given the fact (or rather, the claim) that everything went so well, voices around the anti-feminist action group Demo für Alle (“Demonstration for All”) are demanding the abolition of compulsory schooling.

In conclusion, it can be said that gender is a critical category that is surfacing within the wide variety of effects the current pandemic has caused. Thus, problem-solving strategies that take this concept into account become even more important. In accordance with this, it cannot be sufficient to applaud the indispensable and yet badly paid employees who uphold the system once a day while no efforts are made to improve the working conditions and salaries of those occupational groups. This would be as important as financial security in order to combat dependencies, reliefs in view of multiple workloads (e.g. by means of a corona parental leave) or the sustainable funding of violence protection organisations. Another significant contribution might be seriously taking account of gender budgeting in recovery packages or the upcoming austerity measures, as well as the closer involvement of women’s organisations into the decision-making process. On top of that, the re-negotiation of gender-specific societal arrangements should not be forgotten after the crisis has passed.

Judith Goetz holds degrees in Literary and Political Science and is a lecturer at various universities. She is a member of the research group Ideologien und Politiken der Ungleichheit (“Ideologies and Policies of Inequality”, www.fipu.at) and of the research network Frauen und Rechtsextremismus (“Women and Right-Wing Extremism”, http://www.frauen-und-rechtsextremismus.de/cms/).

Her main interests include women/gender and the extreme right, as well as anti-feminism. Most recently, she was co-editor of the anthologies Untergangster des Abendlandes. Ideologie und Rezeption der rechtsextremen ‘Identitären’ (Marta Press, 2017) and Rechtsextremismus Band 3: Geschlechterreflektierte Perspektiven (Mandelbaum, 2019).