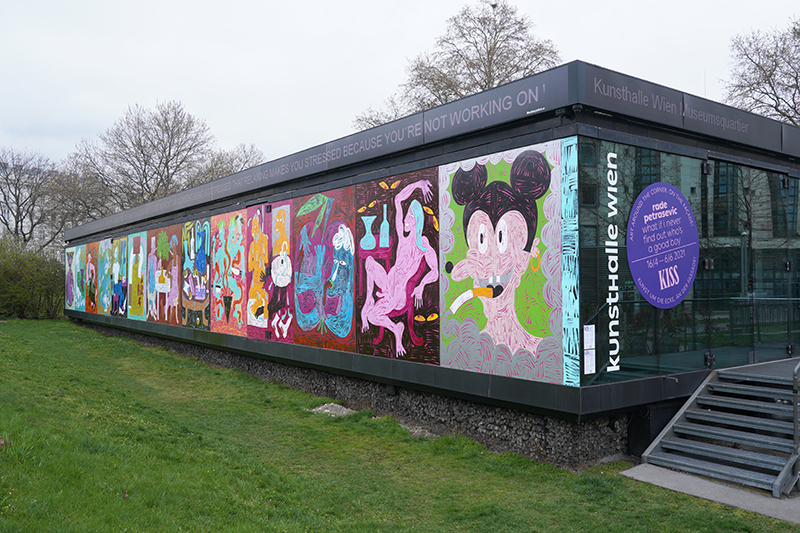 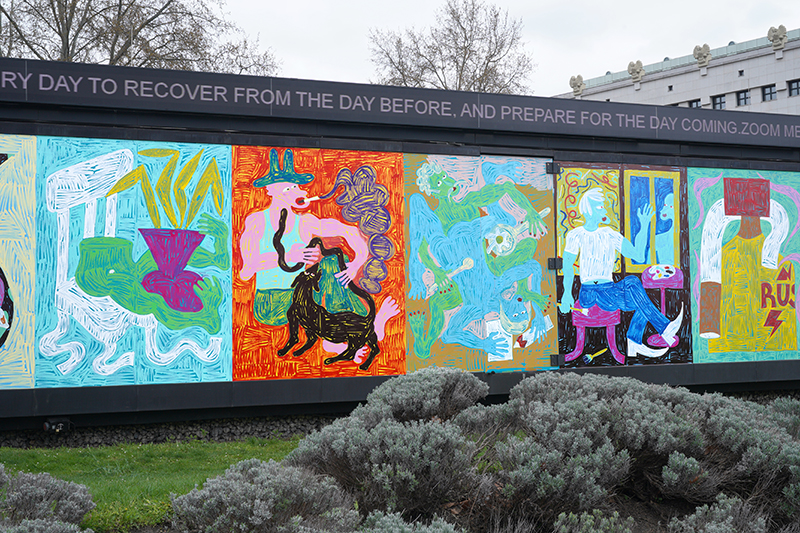 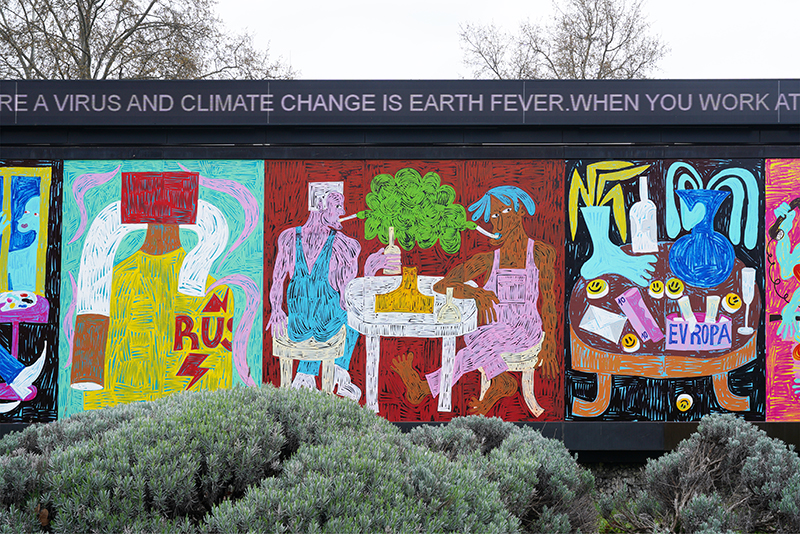 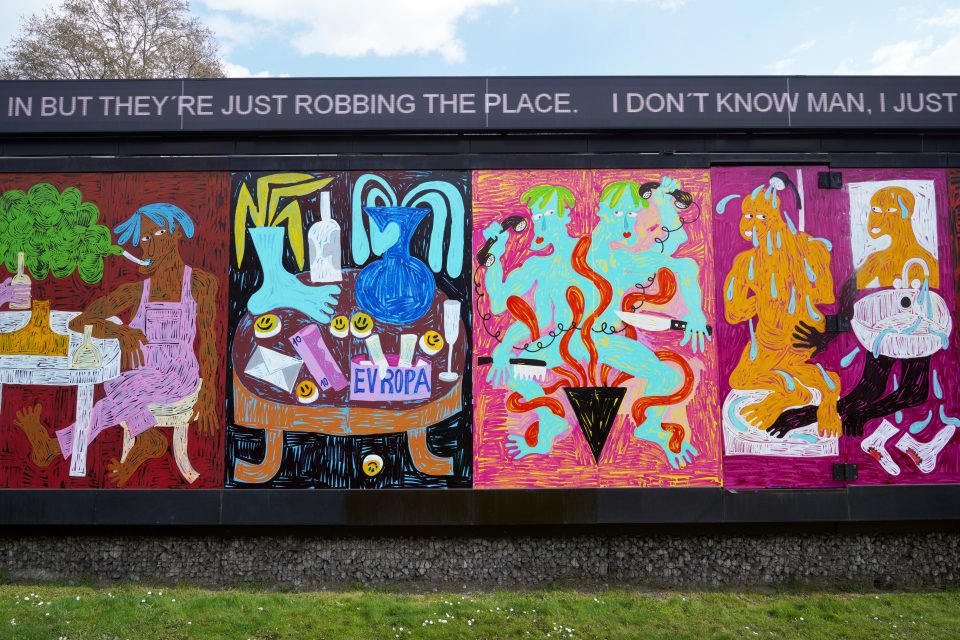 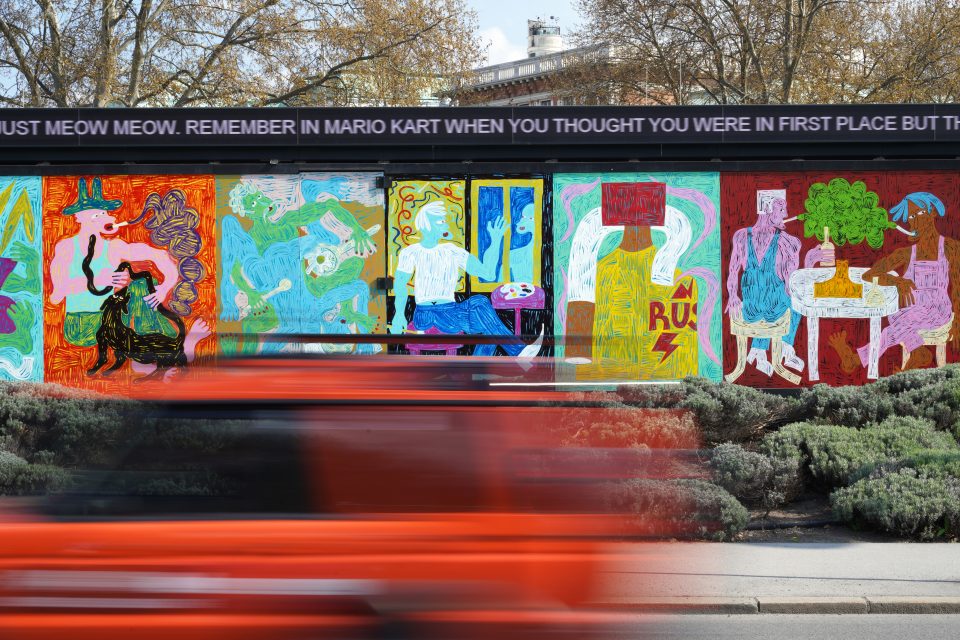 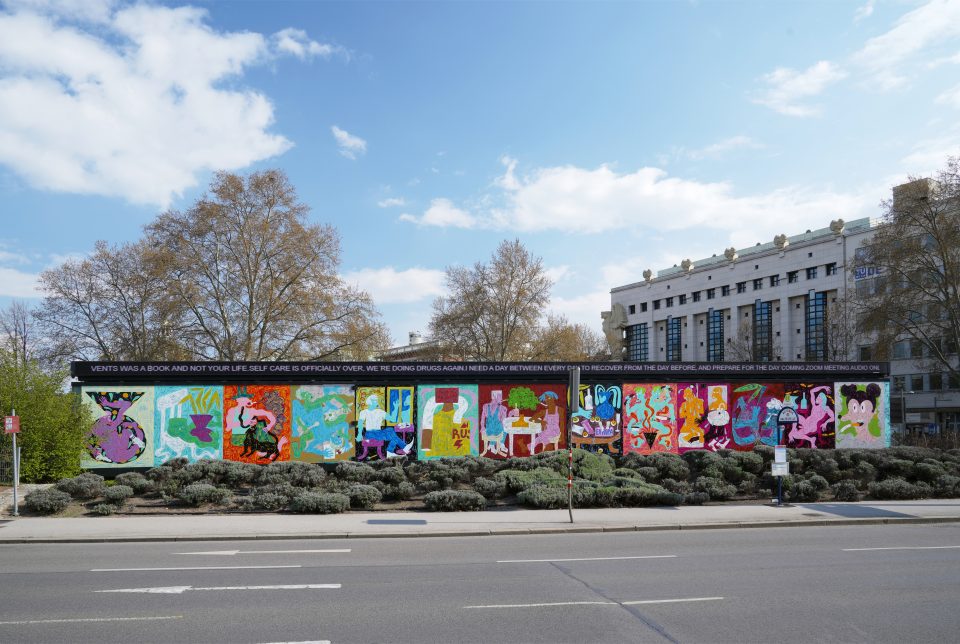 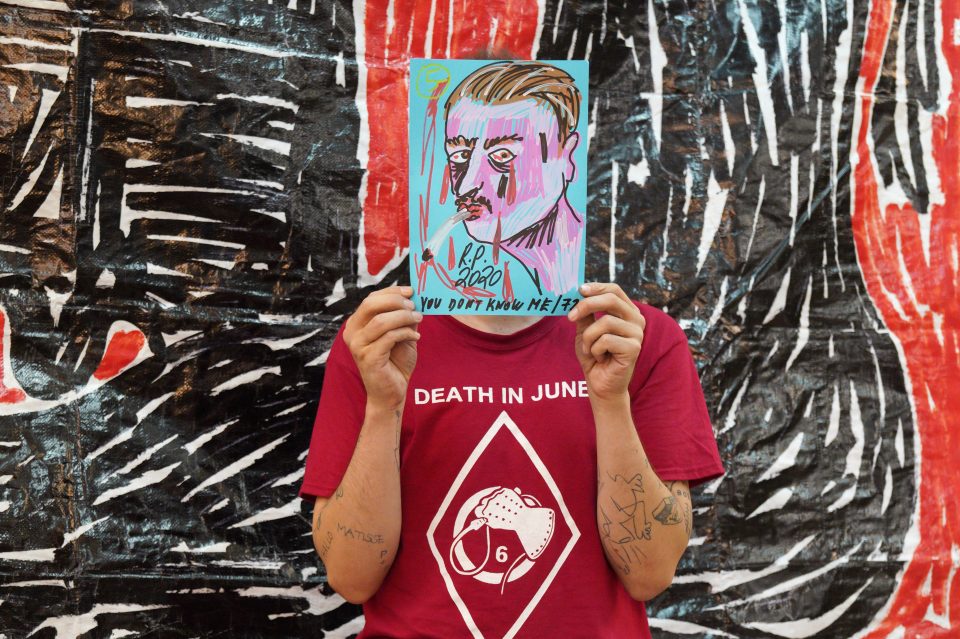 For the second chapter of KISS, Rade Petrasevic is creating a large-scale mural—an open-air frieze, if you will—that covers the full length of the front glass facade of Kunsthalle Wien Karlsplatz. The mural is accompanied by short quotes that run across an LED screen at its top, meant to both contextualize and destabilize the work’s imagery. Categorizing this work as a frieze is not a coincidence, as it exists in close spatial and spiritual proximity to what is perhaps one of the most popular and well-known friezes of recent Western tradition: Gustav Klimt’s famous Beethoven Frieze (1902), which features an array of slightly surreal scenes that induce further interpretation and elaboration from the viewer.

While memes are often devised to provoke a quick laugh, cheekily pairing images with few words, it is undeniable that they are equally effective as what could be called popular philosophical, critical, and social commentary. In this sense, their modus operandi is most definitely akin to Petrasevic’s deployment of imagery and words.

In the context of the ongoing pandemic, which has been mercilessly dragging on for more than a year now and is not likely to subside anytime soon, these sentiments could easily be read as a cry for help from a society that is collectively on the verge of exhaustion, that has seen a sharp decline in its mental health, and that is faced with unresolvable moral questions regarding which sort of sacrifices, as well as risk-taking, are justifiable under these extraordinary circumstances.

This is where Petrasevic’s frieze picks up the thread: his figures tell the story of humans desperate for touch and companionship. Awkward, lonely figures enter into strange relationships and exchanges with nonhuman entities. Finally, they talk to their plants (just as mother always suggested); they daydream of the warm and fleshy embrace of a usually lifeless chair; they grow an array of Shiva-like arms in order to cope with the endless number of tasks at hand; and they reach into a void when they look for solace among one another. Teetering on the edge of insanity, they have to constantly weigh how much irresponsibility is defendable versus how much responsibility is actually bearable.

In the course of a year, babies have been born that have only known their parents, only children and their parents are coexisting in despair, teenage angst has gained a hitherto unknown level of intensity, university students are spending their so-called wild years on Zoom, the elderly and vulnerable are withering away under multiple threats, and romantic relations have been catalyzed into existence or oblivion. All the while, the usual dichotomy of work and leisure has dissolved into that of work and sleep—or perhaps work and work?

But this weighing of lesser evils is of course not only practiced within the personal but also within the political realm. According to the medical profession, every life counts and must be saved—so goes the oath—but from a political science perspective, the maxim is to do what is best for most.

And in this whole confusion of regulations, lockdowns, and restrictions, where to find the balance between not feeling completely infantilized yet also practicing enough adulting to live a life that still finds time and space for joy, for pleasure, for the erotic—in sexuality and intimacy, but also in all other aspects of existence as well. And preferably without too much guilt, please.

And, really, so what if we never find out who is a good boy, a good girl, or a good enby?

The work of Rade Petrasevic (b. Vienna in 1982, lives and works in Vienna) inhabits a figurative space of pseudonarration, where classical painterly tradition – meaning oil and canvas, the still life genre, and the nude model – effortlessly mingle with marker-pen aesthetics, blunt stereotypes, easily readable commercial signifiers, and plastic shower curtains. Born out of impatience, Petrasevic’s distinct style simultaneously denotes its painterly pedigree while also revealing a more humorous and laid-back approach to the big topics of art history.

The often deceptively simple and seemingly innocent scenes, as well as the use of stereotypes and clichés, allow Petrasevic to freely speak about sexuality, fetishes, bodily transformations, and the tensions between privacy and public. His bold colors, simple shapes, and cheeky titles create instant associations and numerous readings that also suggest approachability, warmth, and intimacy.

Within the framework of KISS Rade Petrasevic creates new work that loosely relates to the politically charged history of the mural but taking on an idiosyncratic form true to Petrasevic’s personal style. His work unapologetically drags painting and art history into public space.