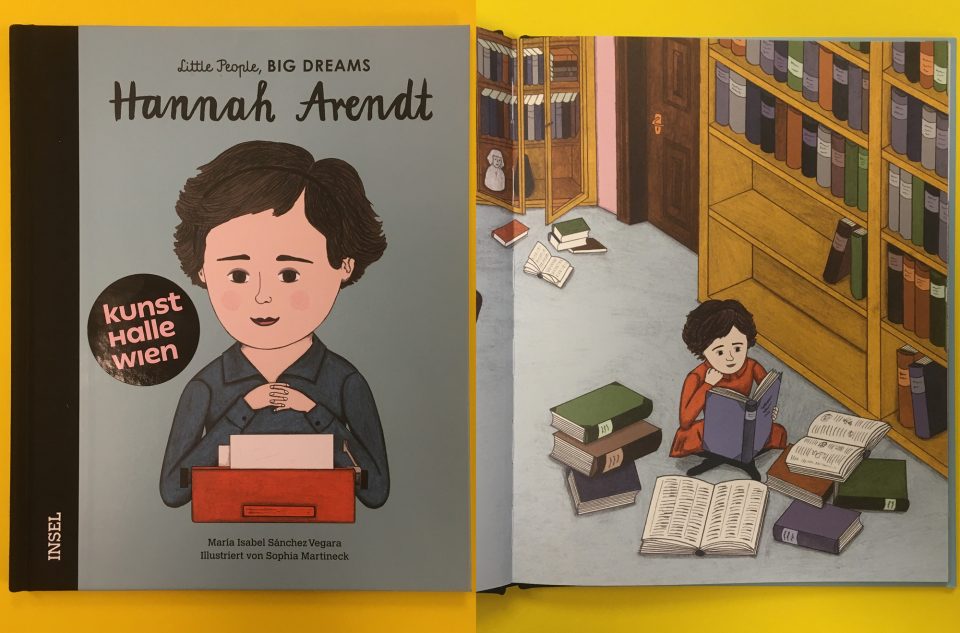 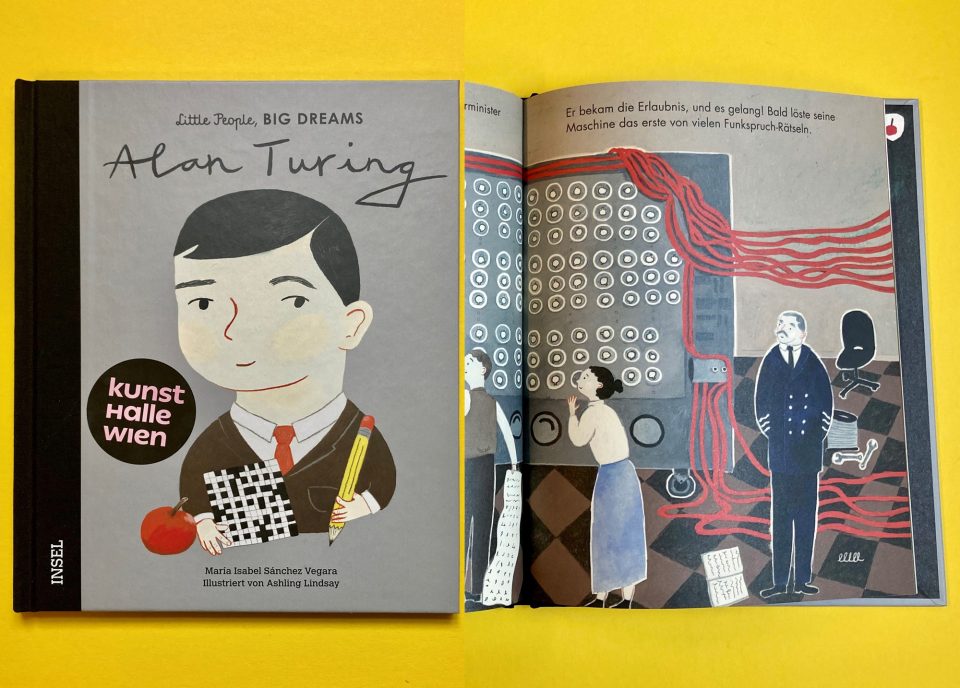 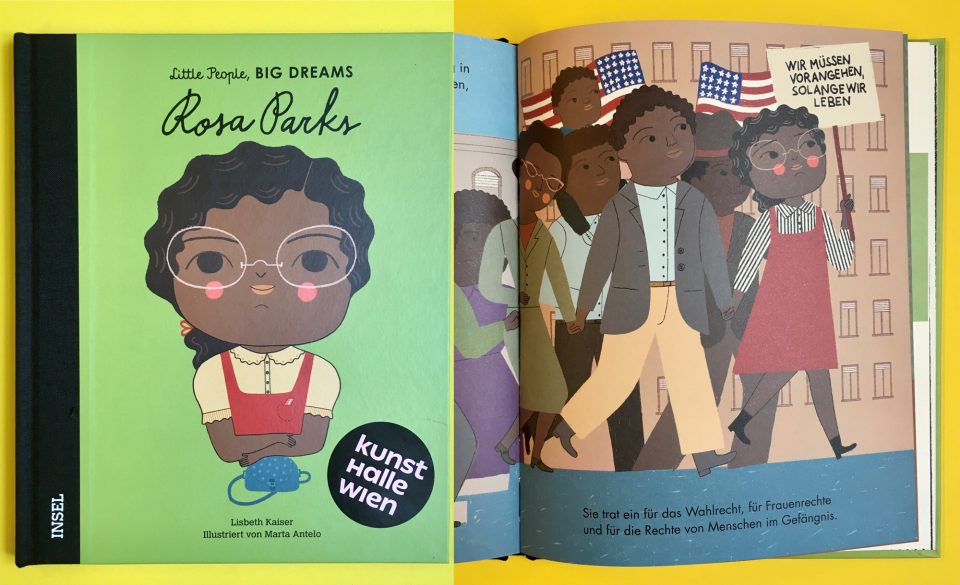 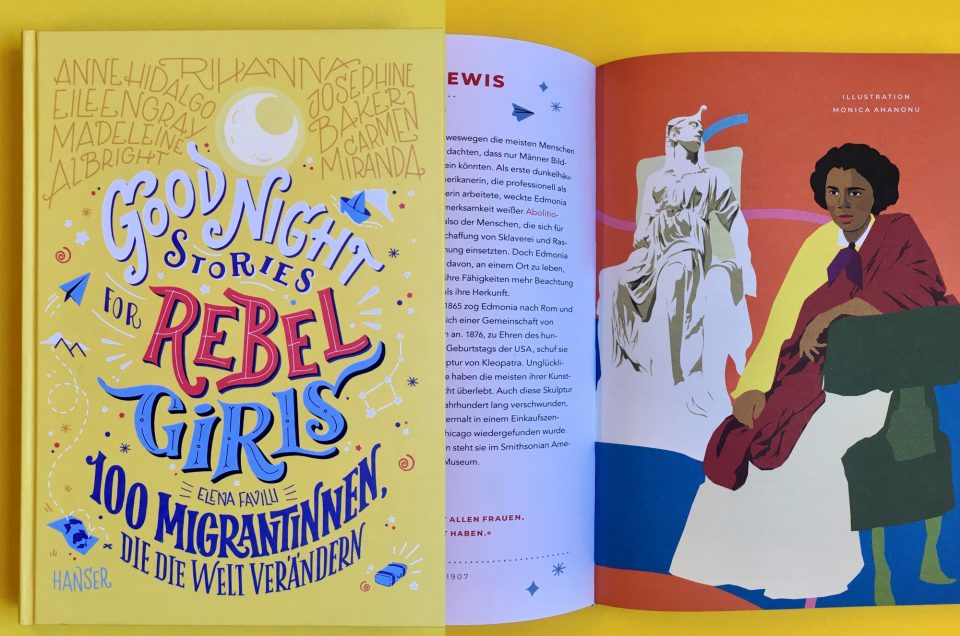 Why are there so few streets named after women in Vienna? And why are monuments currently being torn down off their pedestals in so many places? These are just a couple of the questions we explored in our hands-on exhibition Space for Kids. It’s Your Mo(nu)ment! (1/10 – 8/11 2020) at Kunsthalle Wien Karlsplatz.

In our research for the exhibition, we came across a lot of really great books – and that’s why we want to give you a few reading recommendations:

Little People, Big Dreams is a gorgeously illustrated series published by Insel Verlag that tells the stories of strong individuals who led inspiring lives. The spellbinding books make these larger-than-life figures relatable to young readers and embolden them to follow their own paths and never betray their dreams.

Today’s reading tip features Hannah Arendt. She was a philosopher, someone who thought for a living, so she was a very smart woman. She lived in Germany and was Jewish. That’s why she was persecuted by the Nazis, and in 1933 she was even arrested and held in jail for several days. But then she was able to escape to the United States, where she continued to write important books. She also taught political theory at various universities and kept “thinking in new ways about humans and power,” as this beautifully illustrated book puts it.

And maybe you’ve noticed that there’s actually a street sign in Vienna with Hannah Arendt’s name on it. If you haven’t seen it, you can find the Hannah-Arendt-Park, also known as Hannah-Arendt-Platz, in the 22nd district, in the new neighborhood called Seestadt—it’s just a quick ride on the subway. When you visit the area, you’ll see that it has unusually many streets named after women. So you won’t have to walk for hours on end to find just one such street, the way it is in many other parts of Vienna.

In this reading tip, we want to introduce you to Alan Turing, an English mathematician and pioneering computer scientist. When Alan was a student at university, in the 1930s, he came up with the idea of building a machine that would be able to solve any possible arithmetic problem. He was still a kid, and so at first no one believed in his invention. But when the Second World War broke out and Nazi Germany declared war on the United Kingdom, the British government asked the smartest people all over the country to come together and help with the defense effort. Alan Turing was one of them.

The Germans were using an extraordinarily complex secret language for their military communications. The British were able to pick up the signals, but no one knew what the messages meant, because they were written in mathematical formulas. Alan knew right away that his invention was the only thing that could crack the code. He kept pushing for his machine to be built, and in the end it was. It worked beautifully—now the British were able to tell when a German attack was coming and could ready their defenses. This saved many people’s lives.

Alan was a hero, but instead of celebrating him, the government kept his invention a secret. That was because he was gay, which was forbidden in England at the time, and he was even forced to take medications against it that made him very sad and depressed. The British government didn’t apologize for its horribly unfair treatment of someone who had done so much for his country until fifty years after his death.

Alan’s computing engine is the grandfather of our modern computer—and so its inventor also laid the foundations for the development of artificial intelligence, the capability that lets computers solve complicated tasks on their own, which is central to the functionality of any smartphone today. And he gave his name to what is still called the “Turing test”: a kind of test for computers. To pass it, they must make it impossible for a scientist to tell whether she’s talking to a human or a machine. No computer has ever passed this test yet. But scientists now agree that it’s only a matter of time.

Our next reading tip introduces the reader to the American civil rights activist Rosa Parks. She grew up in Alabama under segregation. For decades, many American states had laws that prohibited black people from using the same services and amenities as whites, from public bathrooms and reserved bus seats to movie screenings. It took long and fierce protests organized by the civil rights movement to outlaw racial segregation.

Rosa made a key contribution to this effort: her refusal, in 1955, to give up her seat on a bus for a white man ultimately led to the end of segregation and unequal treatment of blacks and whites in public transportation. Her life’s work as a champion of equality in schools, workplaces, and housing and advocate for women’s rights was honored with numerous awards.

In this book you will find 100 stories about unbelievably strong and brave women – the author calls them “rebel girls” – who want to make the world a better place: for themselves and for the people around them, regardless of the risk. All of these women left their homelands for various reasons and moved to a different country.

For example, the sculptor Edmonia Lewis: she was born in New York in 1844 as the daughter of an Afro-Haitian father and a mother from the Native American Mississauga Ojibwe people. During her studies, she experienced terrible racism and was even falsely accused of murder. Edmonia was the first US-American woman with dark skin to work professionally as a sculptor and therefore drew the attention of the abolitionists – they were people who were engaged for the end of slavery and racial segregation. However, Edmonia’s biggest dream was to live in a place where her talents received more attention than her skin color. So in 1865, she moved to Rome, where she joined a community of artists.

On the occasion of the 100th birthday of the USA in 1876, she created a sculpture of Cleopatra. Unfortunately, the majority of her artworks did not survive to this day. Also this sculpture had disappeared for a century, until it was found again painted over in a shopping mall in Chicago. Now the sculpture has its rightful place in the Smithsonian American Art Museum in Washington, DC.