The Right to Stay 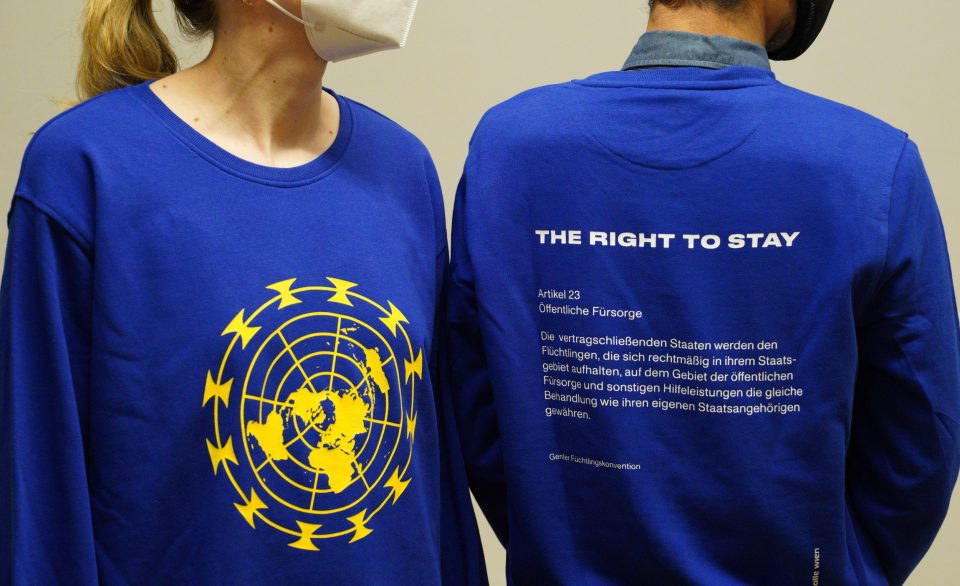 Artist and designer Esther Straganz designed the sweater The Right to Stay. It was produced by Wiener Unart in an edition of 100 pieces (+5 AP). The project was developed to raise awareness of the still devastating situation of refugees – and to respond with solidarity, support, and action.

The sweater is available at Kunsthalle Wien Museumsquartier for € 39.

“As an artist, I have had the opportunity to travel and moreover the freedom to participate in several artist residencies and stay in countries far away from my homeland. It is easy for me to be a citizen of the world. I am kissed by privilege and wealth because I was born in Austria. But often I am ashamed to be an Austrian, a European, especially when it comes to the question of who has the right to stay here and how we deal with it. We put kids, grandparents, and lovers – who just fled from war and violence – into camps and prisons. We build fences around our “free Europe.” These fences do not protect us from terrorists, they just foster fear and xenophobia. Do we want this? Do we want to live in a Europe that watches people drown in uncertain seas?
How can we help those who have surrendered their friends, homes, and loved ones, hoping to find a better future in a world full of fences? With solidarity, support, and actions! This sweater can be used as an everyday mini-protest outfit. I hope it suits you well.” Esther Straganz

This sweater exemplifies the disparity between written agreements and actions taken in real life. While the Geneva Refugee Convention clearly states that refugees must be permitted the same rights as a country’s citizens, the reality today proves these written and ratified words quite wrong.

Geneva Refugee Convention
ARTICLE 23
PUBLIC RELIEF:
The Contracting States shall accord to refugees lawfully staying in their territory the same treatment with respect to public relief and assistance as is accorded to their nationals.

Since the refugee crisis in 2015, in particular, borders and border controls have substantially gained significance due to refugee flows primarily from Syria and other war zones. Border controls throughout Europe have become increasingly stricter to a point where almost all countries, including the members of the European Union, now refuse to admit refugees.

This past year – as a result of the ongoing COVID-19 pandemic – borders were again closed almost everywhere around the world, and when refugee camps in Moria, Greece burnt down, most EU countries again declined again to help or to open their borders.

The NATO WIRE
The fence delineates a border that always constitutes a separation barrier between countries. Such barriers are typically constructed for border control purposes, such as curbing illegal immigration, human trafficking, and smuggling. The NATO concertina wire, a special form of barbed wire often used in addition to a border fence, which is cited graphically in the design of this sweater, is employed specifically to severely impede or prevent the unauthorized passage of persons.

THE QUOTE
It originates from the Geneva Refugee Convention, a United Nations multilateral treaty agreed upon in 1951, which defines who is a refugee and sets out the rights of individuals who are granted asylum and the responsibilities of nations that bestow it.

THE UN EMBLEM
The United Nations (UN) is an intergovernmental organization, which aims to maintain international peace and security. It is made up of 193 member states worldwide. The design of the emblem, which is used on this sweater in an adapted form, is “a map of the world representing an azimuthal equidistant projection centered on the North Pole, inscribed in a wreath.”