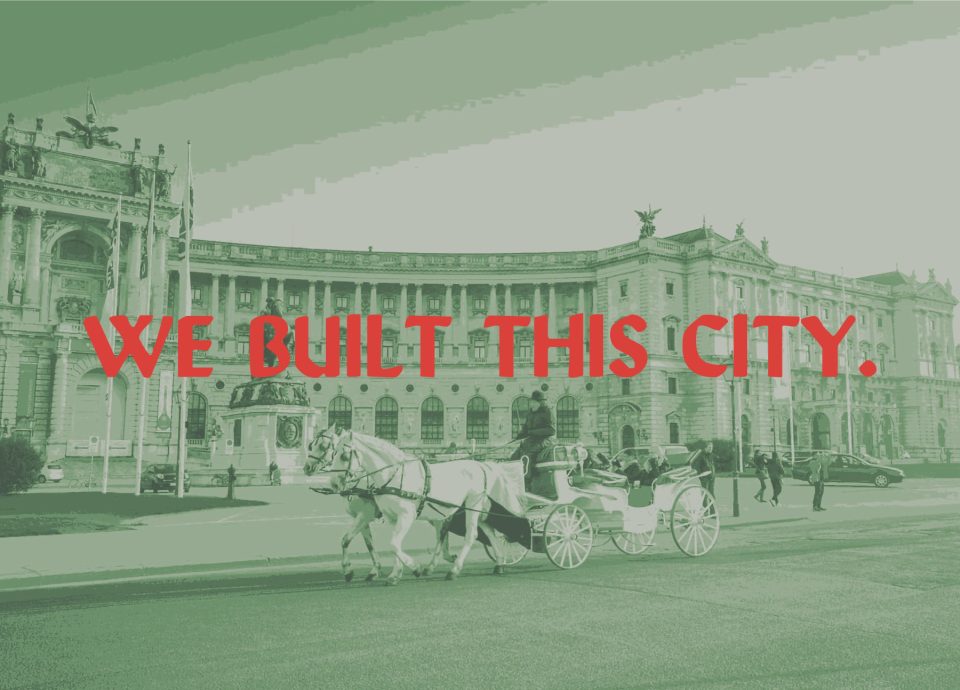 A cooperation of Kunsthalle Wien, Arts of the Working Class and wohnpartner

What if flags did not represent a nation, but communities of neighbors?

Kunsthalle Wien, Arts of the Working Class and wohnpartner present six new flags produced for selected Gemeindebauten in Vienna as part of the Weapons of Choice project. The flags display quotes from songs that were selected by residents of the Gemeindebauten in the context of an open call and deal with work, unemployment and workers’ rights.

The Wiener Gemeindebau Choir will sing.

There will be food and drinks.

Since 1945, Vienna’s municipal buildings have only hoisted the national flag. The exclusion created by the idea that “a nation is a community” is countered by the presence of the expressions of the diverse inhabitants of the Gemeindebauten. Symbolically, their texts exchange nationhood for a collective consciousness of solidarity action – they create signs and reclaim a voice and a space that we are deprived of under the capitalist economy and our position in it.

The 23rd issue of the Arts of the Working Class newspaper shares the same title as the flag series and will also include all flag motifs. Hence, it builds a connection between the Gemeindebauten buildings, Kunsthalle Wien Karlsplatz (where the exhibition In the meantime, midday comes around will be on view from November 10) and the class struggles in the city of Vienna and beyond. The real flags will fly in the wind until the red-white-red ones take their place again for the Austrian National Day.

A street journal on poverty, society, wealth, and art, Arts of the Working Class is published every two months and features contributions by artists and thinkers from different fields and in different languages. Its terms are based upon the working class—meaning everyone in the twenty-first century—and it reports on everything that belongs to everybody.

The focus of wohnpartner’s work lies on community and conflict work as well as networking in Vienna’s Gemeindebauten – with the aim of strengthening and improving housing satisfaction and the quality of life in the Gemeindebauten together with their residents.

Credits of the selected lyrics:

„We built this city.“ / quote by Starship from the song „We built this city“, produced by Peter Wolf, Jeremy Smith, Grunt Records/RCA Records, written by Bernie Taupin, Martin Page, Dennis Lambert and Peter Wolf / released on  August 1, 1985 as part of the album Knee Deep in Hoopla / selected by Markus Hirnsperger, flag design by Paweł Sochacki, © Arts of the Working Class for Wohnpartner and Kunsthalle Wien, 2022

„Ja, jetzt wird wieder in die Hände gespuckt!“ / quote by Geier Sturzflug from the song Bruttosozialprodukt, produced by Geier Sturzflug, written by Reinhard Baierle, Friedel Geratsch and Dicke Lippe / released on July 21, 1982 and subsequently as part of the album Heiße Zeiten in 1983 / selected by Maria Schwarz, flag design by Thomas Spallek, © Arts of the Working Class for Wohnpartner and Kunsthalle Wien, 2022

„When we bleed, we bleed the same.” / quote by Muse from the song „Map of the Problematique“, produced by Rich Costey and Muse, written by Matt Bellamy / released on July 3, 2006 as part of the album Black Holes and Revelations / selected by Natascha Schmidhofer, flag design by Nour Shantout & Sonia Garziz, © Arts of the Working Class for Wohnpartner and Kunsthalle Wien, 2022