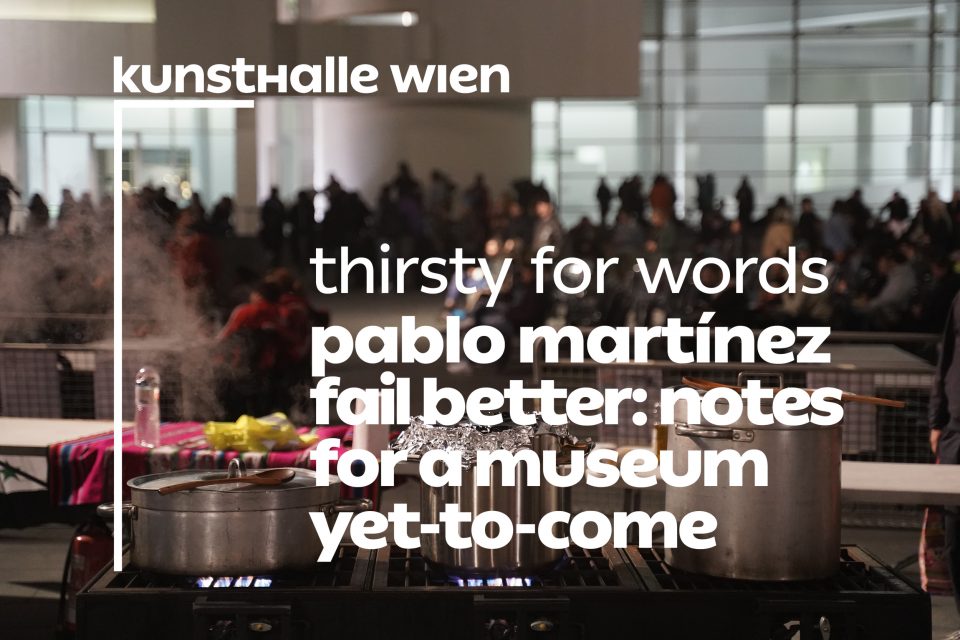 In recent weeks the media has paid close attention to the gradual reopening of museums, following the lockdown period. Most of the television reports and interviews with various heads of institutions have focused on the various ways that exhibitions and events have been affected by the pandemic, as well as the new rules and guidelines for visits to these spaces. However, there has been little discussion about how museums should take these circumstances as a chance to rethink their ethical and political foundations, along with their structures and economics. Despite the exceptional nature of this pandemic, its emergence has merely confirmed what we have been discussing for years in seminars and debates in some museums and art centers: that the system itself is collapsing and decisive, wide-reaching action must be taken. In the case of the museum, the problem is a complex one, since, in the last few decades, the museum has proudly endorsed dynamics based on permanent mobility, the economy of exposure, and the logic of exponential growth. Therefore, as well as debating how social distancing will change the practicalities of museum visits, it is also perhaps necessary to reflect, collectively, on the urgent refounding of the museum, based on new sets of material and aesthetic parameters. The whole world as we know it is undergoing a process of restructuring, due to ecological collapse and the subsequent civilizing crisis. If museums want to play a key role in this restructuring, and make a commitment to climate justice, they have no choice but to give up their present mission and learn how to fail better.

In The Queer Art of Failure, cultural theorist Jack Halberstam analyzes how capitalism and the heteropatriarchy have produced normative ideals of happiness and success – ideals that must now be challenged. That which is often deemed a failure might in fact be, as Halberstam suggests, a genuine form of existence that simply does not conform to the prevailing logics. An act of rebellion against the imposed norm. If we consider Halberstam’s proposal from ecofeminist perspectives, this kind of dissidence would be enacted by dismissing any concept of well-being that is based on buying power, by spurning the accumulation of goods and by proposing ways of living that are more austere and therefore less harmful to the environment. In terms of museums, this approach would ideally lead to a model that pushes back against the overbearing logics of accumulation, productivity, value, property, novelty, and the constant pressure to sustain income from ticket sales, venue hire, and sponsorship. It would bring about a museum that is more internationalist than international, that supports the local without being provincial, and that refuses to keep adding to their already bloated rosters of international artists, star speakers, and low-paid workers. A museum that advocates simplicity, and that ditches all the conventional indicators that have, until now, been used as gauges of success. Because, as the Spanish ecofeminist Yayo Herrero has noted, all these indicators have helped shape a culture that is directly at odds with life itself. A museum that works toward the rematerialization of culture (or, rather, that becomes aware of its inherently material conditions, because it barely has anything to do with the immaterial) and that resolutely opts for decarbonization, across the board. Specifically, this decarbonization would ascertain the museum’s ecological footprint, as caused by its programs and structures, and act accordingly. On an abstract level, this process is just as complex and ambitious as trying to decarbonize the shared imaginaries upon which modernity was built, something that art historian Jaime Vindel has so aptly named the “fossil aesthetic.” This shift would be approached in two ways: on the one hand, by rewriting the narratives of art history from a fossilist perspective that would include not only a critique of the modern idea of “progress” but would also call into question collective belief in unlimited growth, which the art world has helped propagate, as well as the glorification of uncontrolled desire and futurist accelerationism, to name but a few examples. On the other hand, art should help create new shared imaginaries of lifestyles that are not so dependent on fossil fuels – that is to say, the exact opposite to what the biennialization of the art world has achieved. If, indeed, this process of biennialization, which began in the 1990s, has helped forge a positive image of globalization and a perception of mobility as a synonym for creative freedom and social dynamism, all with a steep ecological cost, perhaps it would now be fitting for the art world to assist in the undoing of this process, and to champion a kind of museum that participates in and promotes a libidinal economy that has a low ecological impact.

For some time now, I have been writing about the concept of the “museum yet-to-come” as an exercise in institutional imagination and conceptual production. As I have expressed elsewhere, the notion of “yet-to-come” has two sides: on the one hand, it draws a possible plan of action that adapts its operation and activity according to the biophysical limits of the planet, and on the other, it borrows a core concept from Cruising Utopia: The Then and There of Queer Futurity, published in 2009 by the Cuban American theorist José Esteban Muñoz. In his book, Muñoz defines “queerness” as something that is not yet possible, not reachable, yet-to-come: it is a rejection of the here-and-now, and a nod to the concrete possibility of a different world. He puts forward a kind of queer sociability or queer future that challenges the heteropatriarchal here-and-now by moving it into the then-and-there of minority groups who activate aesthetic strategies for survival, as well as imagining ways of being inside utopian worlds. In this sense, the act of queering the museum would entail the inclusion of all those minority groups who have long been excluded from participating in the creation of imaginaries or from telling other kinds of histories. Furthermore, this approach would spark the kind of imaginations that allow us to break free from the prison of the present time where our own imagination is held captive. Queering the museum would shake up its very purpose, betray its norms, and help create the new worlds that would inevitably emerge from the chaos. It would challenge the notions of “what must be shown” and “how it must be displayed,” and, in so doing, it would help overthrow the bourgeois notion of mass public order, of turning people into orderly visitors, which essentially means control, since art museums largely have a normalizing function – not only through the regulation of artistic work but also through the ordering of bodies, relations, and times. The challenge is therefore how to begin imagining the future of institutions that are so deeply rooted in the past, in a process that would take solidarity with other species as its starting point and that would dismantle consumerist imaginaries, rebuild cooperative communities, and recognize the individualistic and extremely fossilistic character of our shared imaginaries of apparent emancipation. The challenge is how to build a museum that is not only worth visiting, but also worth living.

In May 2020, the Spanish digital journal ctxt published artist and activist Marcelo Expósito’s inspiring conversation with Manuel Borja-Villel, director of Madrid’s Museo Reina Sofía: “The museum will have to provide care like a hospital, while still being critical.” This idea, which is referenced in the title of the interview is both highly productive and provocative, since the invitation to prioritize care means that the museum will inevitably fail in some of its other remits. I suppose that when the director of Spain’s national gallery made this statement, he was proposing not only to provide a greater degree of care, but also to recognize the work of caring that museums have in fact been carrying out for decades, mainly through their educational departments and public programs. In this sense, it would perhaps be more accurate to say that the museum “will have to continue to provide care” or that it “must care for those who do the caring and improve the working conditions and status of educators, mediators, and all the staff who do outreach work.” The task of caring is crucial in these times of “capitalist realism,” to echo the words of the cultural theorist Mark Fisher, given that suffering is not limited to the museum’s visitors, but extends to its workers. It is therefore necessary to review the extent to which the museum is also the root cause of this distress, given the forms of production it favors: the present model allows and in fact demands that cultural producers work on several different projects at the same time, all of which are paid at dubious rates, are extremely precarious, require the tireless and hurried efforts of many interconnected people, and are in a state of constant mobility. In addition, in the case of European public institutions, the rigidity of the regulatory framework and the strictness of labor legislation – which has never taken into account the nature of artistic work or new forms of cultural production – play a large part in generating situations where the already precarious existence of artists is further blighted by bureaucratic violence. The idea of total mobilization is embodied in cultural workers, who are always ready and available, always on their toes. The pandemic allows us to see even more clearly just how fragile this model is – a model in which the artist, just like a juggler, has to keep moving if she does not want to be left empty-handed. Without a universal basic income, the system in its current form is unsustainable.

I would like to dwell a little more on the statement “The museum will have to provide care like a hospital, while still being critical,” and to invert its meaning, since the act of caring is in fact a prerequisite so that the museum can become, for more people, a critical space. This is because, as opposed to what the patriarchal knowledge structure has taught us, knowledge is not exclusively generated through critical distance but rather through the affects, which are what set off thought processes in most cases. This fact is especially relevant if we participate in a form of care that is based on mutual support and an equality of forms of intelligence, rather than a paternalistic idea of care. The hospital-like proposal is extremely apt in the way it shuns the privately managed public hospital model that has been implemented in Madrid over the last decade, and instead adopts the medieval hospital-temple principle that would welcome pilgrims with food, rest, and ecstatic pleasure. It would be a museum that provides shelter and encourages neighbors, fellow citizens, and pilgrims to find, within its walls, a place where they can “pass the time” – a time unlike that of productivity and consumption. However, I cannot finish this article without first sharing my fear that the idea of museums becoming more like hospitals might trigger a new curatorial wave and that, following the “social,” “educational,” “affective,” and “performative” turns of the last few decades, it will bring about some kind of “hospital turn.” This long line of “turns” creates an image of an art system that, just like a whirlpool, spins on its own axis. It is a flashy display of constant dynamism, but, in practice, it only ever deals in conceptual terms, and so it does little to actually encourage any radical change in the material foundations of the institution. If the museum wants to keep its head above water, rather than spinning on and on within these choppy seas, it will have to change course toward more ecosocialist waters.